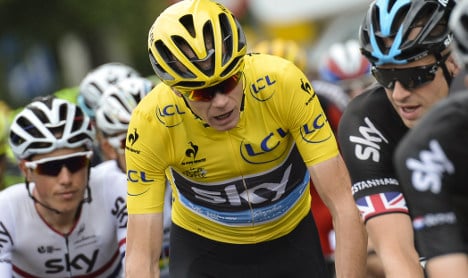 Chris Froome revealed Friday he will not be wearing the yellow jersey on the Tour de France's seventh stage from Livarot to Fougeres.

Froome is the Tour race leader due to German Tony Martin's abandonment after breaking his collarbone in a crash at the end of Thursday's sixth stage.

“For those asking, I won't be wearing yellow today! All the best to @tonymartin85 with his op & recovery,” said Froome on his official Twitter page.

The 30-year-old Briton was set to start Friday's seventh stage wearing the yellow jersey after German Tony Martin was forced to abandon after crashing on Thursday and breaking his collarbone.

Martin was the second yellow jersey wearer to crash out of the race following Swiss Fabian Cancellara on Monday.

Cancellara's crash, in which he broke two vertebrae in his back, allowed Froome to take the jersey by finishing second on Monday's stage.

But he lost it to Martin the very next day as the German won that stage.

However Tour rules stipulate that the Kenyan-born Froome has the option not to wear the fabled tunic out of respect to the stricken Martin.

Yet the 2013 champion could have found himself in trouble as well on Thursday as he was caught up in the Martin crash.

“I took a knock on my knee bone and there was a little bit of blood there, but nothing more than that, I'm absolutely fine,” said Froome.

“I had to wait on the roadside as my rear wheel was buckled and I couldn'tride on.

“Until the finish (Thursday's) stage was definitely the most straightforward we've had so far. We had good weather, no crazy winds, and the pace of the racing was a little more relaxed.

“For me, it was about staying out of trouble and the guys did a good job in keeping me towards the front of the bunch.

“As I've said before, I'm really happy with how things have gone up to this point and couldn't have asked for any better. Hopefully we can keep that.”

Froome was forced out of the defence of his Tour yellow jersey on last year's fifth stage after a third crash in two days saw him break his wrist.

He also had a wobbly moment on the cobbles on Tuesday's fourth stage when he tried to duck through a gap that didn't exist.

He managed to stay upright then and has so far avoided the majority of the carnage affecting this year's Tour.

A massive pile-up on Monday saw around 20 riders hit the tarmac and seven of those, including Cancellara, were unable to start the race the next day.

A couple of those that did manage to soldier on included Australians Michael Matthews and Adam Hansen, who currently occupy two of the last three places in the standings.

The other rider in that last three is Briton Alex Dowsett who crashed badly on Tuesday's fourth stage, finishing 10 minutes after everyone else.

On Wednesday French sprint hope Nacer Bouhanni and New Zealander Jack Bauer both quit the Tour after spills, while Swiss Michael Albasini finished the stage but pulled out before Thursday's start due to a broken arm.

With Martin now out it makes it 11 riders lost to the Tour over the first half dozen days.

And it could have been worse with the likes of reigning champion Vincenzo Nibali and fellow overall hopeful Nairo Quintana both taken down in Thursday's fall.

Nibali, though, said he was fine: “It's ok, I hit my shoulder and leg, and the bottom of my back, but when you hit the deck it's always unpleasant.”

Quintana, who holds the hopes of a nation on his shoulders as he bids to become the first Latin American to win the Tour, moved to reassure his fans.

“I have a superficial wound. Now in the heat of the moment I don't feel any pain,” he said.

“I hope it's really nothing and that my elbow feels ok (on Friday) morning. People at home can feel calm about this.”