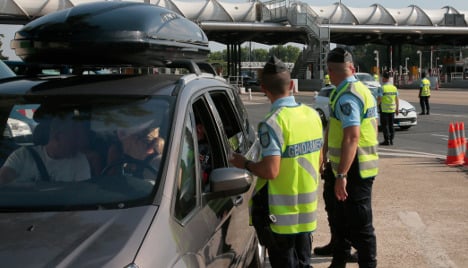 A real police stop on tourists in France. Be aware for fake cops. Photo: AFP

An organised crime gang, who disguise themselves as police or gendarmes – France’s military police – have been targeting motorists on the motorways in the south of France, according to reports on Friday.

They strike at night, mainly in the regions of Provence-Alpes-Côte d’Azur, the Bouches-du-Rhône and Languedoc-Roussillon.

The gendarmerie have warned motorists travelling in these areas to be on their guard — particularly at night .

According to reports in the French press the gang’s chosen targets are foreign tourists, because they are less aware of how French police traditionally operate.

The gang are extremely well organized and use police equipment, such as flashing lights and clothing to help deceive their victims.

Driving in an unmarked car they normally strike between 2am and 6am and follow vehicles before pulling out a flashing blue light and signalling for them to pull onto the hard shoulder.

They shine torches into the face of the driver and any other occupants of the car before carrying out searches of the vehicle claiming to be looking for drugs or fake identity papers.

As they are rooting through the possessions, they pilfer anything of value.

“Sometimes it can take less than a minute and often they purposefully rob mobile phones and the keys of the car, so the victims cannot raise the alarm,” Alain Archaimbault, captain of the Gendarmerie told France Info radio on Friday.

He reminded motorists that a real police search of a vehicle would never take place by the side of a motorway “for reasons of safety”.

He also said it's very rare for police to carry out operations in plain clothes and in unmarked police cars.

He also advised tourists simply no to stop their cars if they are in doubt.

Police in the region have been forced to send out a press release in the hope of alerting drivers.

It made clear that while it would be quite common to ask for driver's papers police, “unlike these motorway pirates” would never ask to search through bags under the pretext of looking for drugs.

The gendarmes tried to reassure tourists by insisting the investigation to track down the culprits was making progress.

“We are confident this probe will be completed quickly,” he said.

But the reports of robberies by fake cops are not restricted to the south of France. Last month police reported around 10 similar incidents on the A13 motorway between Paris and Normandy.

British drivers have also been warned to lock doors while travelling through Calais this summer.