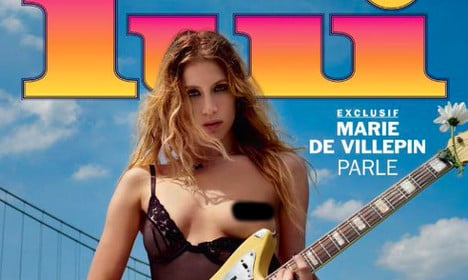 Marie de Villepin, the 29-year-old old daughter of Dominique who was Prime Minister under President Jacques Chiraq, is the talk of the French press after appearing topless on the cover of French men’s magazine “Lui”.

The singer/actress/model is pictured holding an electric guitar standing on board a boat as it crosses the Hudson River in New York. Her dad would be forgiven for being a little red-faced by her choice of clothing or lack of it, but Marie herself is quite content with baring her flesh.

“I am big girl and it's not a problem at all for me to show my breasts or my backside. You have seen my body. Right now you can move on.

And discussing her sexuality Villepin, who is also in a band named Pinkmist, said: “I kiss in French but I f**k American” and that it “wasn't always cool to have a father as a politician who is known in the media.”

The magazine, dubbed the French version of Playboy has pulled off a series of coups in recent months by persuading some high profile names to strip for a photo shoot.

Marie de Villepin, is the latest high profile name to strip for a magazine often dubbed the French Playboy. French Bond Girl Léa Seydoux and Virginie Ledoyen, star of the film “The Beech” also raised a few eyebrows and no doubted boosted sales figures when they appeared semi naked on the front covers. Her father served as Prime Minister of France for two years between 2005 and 2007 and is still a respected figure in France, although he is no longer in front line politics.

If his daughter's previous racy photo shoot is anything to go by then Villepin may yet feel grateful for her strip.

In 2005 Villepin's bid improve his image among the public as he prepared to run for president  was given a boost when his daughter appeared in a photo spread across six pages of Elle magazine.

She appeared beneath the headline “Model Daughter”. She was described as having the appeal of a “Pre-Raphaelite Madonna”.

Villepin's campaign nevertheless failed as Nicolas Sarkozy became president two years later and again in 2012 he was forced to scrap his bid for the presidency when it became clear he had little support from the public.

He is most famous outside France for his 2003 speech to the United Nations, made when he was foreign minister, in which he laid out the case going to war in Iraq.

He is not the first French politician to feel perhaps a little embarrassed by their offspring.

Current French health minister Marisol Touraine had the ignominy of seeing her son imprisoned in 2013 for extortion.

French president François Hollande had to deal with a very public outburst by his son against his ex-partner Valerie Trierweiler as well as his youngest son who made a series about drugs and prostitutes.

Nicolas Sarkozy also came underfire when it emerged his 23-year-son was seeking to become head of La Défense – the financial district on the edge of Paris.

Perhaps the French politician most embarrassed by their child was François Mitterrand, who kept his illegitimate daughter a secret for years.