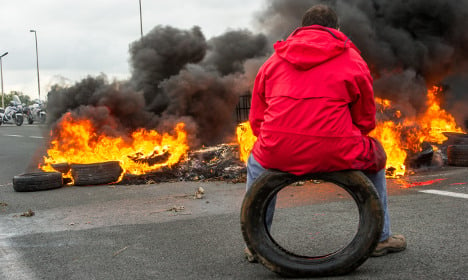 A striking French ferry worker looks on during protests last month. Was it provoked by British protectionism? Photo: AFP

The head of Eurotunnel on Thursday blamed “British protectionism” for triggering a wave of strikes by French ferry workers that disrupted freight and passenger travel on both sides of the Channel.

The company, which manages the Channel Tunnel and its vehicle shuttle services, also owns three ships that operate under the brand name MyFerryLink, which it bought from bankrupt French carrier SeaFrance in 2012.

But that transaction has been fraught with legal complications and early this year, a British tribunal halted MyFerryLink services from the southern English port of Dover to France's Calais on grounds of unfair competition.

“The current situation in Calais, which is terrible, is not due to a Eurotunnel decision,” Jacques Gounon told a parliamentary commission in Paris.

He said it was a result of the British competition commission “continuously defending” British ferry giant P&O and being allowed to “block any development… under a French flag.”

“It's British protectionism that is forcing us to stop this activity.”

He defended Eurotunnel's decision to sell the ferries to DFDS, which he described as a “ferocious competitor” on the Calais to Dover route that wants to challenge British ferry giant P&O.

“It was unreasonable in my opinion to further reinforce P&O which is the maritime leader… DFDS was an operator that needed ships and employees,” Gounon said.