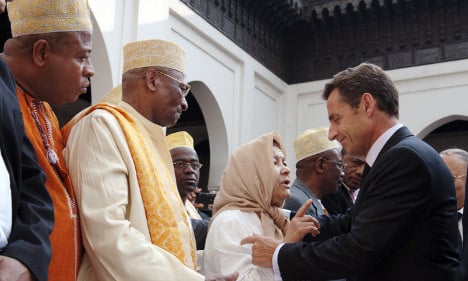 Sarkozy added his name to a list of signatories that includes controversial writer and political journalist Éric Zemmour and philosopher Alain Finkielkraut, as well as Jeannette Bougrab, partner of the late Stéphane Charbonnier, Charlie Hebdo editor .

The petition, published in the magazine Valeurs Actuelles comes after Dalil Boubakeur, the rector of the Grand Mosque in Paris said he was in favour of turning old churches into mosques due to the serious shortage of places of worship for Muslims.

In France there are currently 2,500 mosques, with another 300 under construction, but Boubakeur says the number falls far short of what is needed.

With upwards of 5 million Muslims in France – the largest Muslim population in Europe – Boubakeur and other imams suggest as many as 5,000 mosques are needed.

But his call stirred up a hornet’s nest and Sarkozy has come out firmly against the idea. So too has former French president Valéry Giscard d’Estaing.

“The French Catholic churches [have been] part of the historical heritage of the French population for ten centuries,” he said.

A poll published alongside the petition suggests they are not alone, with 67 per cent of French people apparently opposed to the idea.

“Even if France [has been] deeply de-Christianised since the 1960s, there is a real commitment… to the Christian roots and their symbols,” Jerome Fourquet, Ifop’s director of opinion and strategy, told the magazine.

Sarkozy has toughened his stance towards Islam in recent months, calling for a ban on the veil in universities and substitute meals in schools.

The former president came under fire earlier this year when his Republicans party held a conference to debate the role of Islam in France. Muslim groups announced a boycott of the talks claiming they stigmatised their religion.