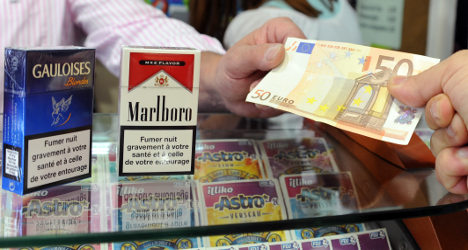 Tobacco sales are on the rise in France. Photo: AFP

New figures show that cigarette sales have seen an unhealthy increase in France for the first time since 2009.

The French Observatory of Drugs and Addiction reported a 7 per cent increase in cigarette sales in March 2015 compared to the same month last year.

There was also an increase of 12 per cent in sales of rolling tobacco – which have reached a record high.

The figures come days after the World Health Organisation (WHO) released a report imploring governments to raise taxes on tobacco products.

On Tuesday, the WHO said too few governments were using increased tobacco taxes as a means of dissuading citizens from smoking.

In its report, The Global Tobacco Epidemic 2015, the United Nations health agency recommended at least 75 per cent of the cost of a packet of cigarettes should be tax, highlighting the fact that 6 million people a year die of smoking-related illnesses – one every six seconds.

The WHO predicts this number will rise to 8 million by 2030 if steps are not taken.

“Raising taxes on tobacco products is one of the most effective – and cost-effective – ways to reduce consumption of products that kill, while also generating substantial revenue,” WHO director general Margaret Chan said. She urged governments to “adopt one of the best win-win policy options available for health”.

France is trying to crack down on tobacco and new laws were brought in earlier this month that banned people from smoking in cars where children are present and from kids playgrounds.

Other laws that will see plain packaging enforced for all cigarette brands are currently going through parliament.

Last month the country's health minster told The Local and other foreign reporters that the government had to do more when it came to preventative health care, particularly around smoking.

Marisol Touraine said: “The strength of Britain is the public health strategy of prevention, notably around tobacco.
“We are a country that has spectacular results when it comes to curing people but prevention is not integrated, although everyone says we have to do it,” she said.