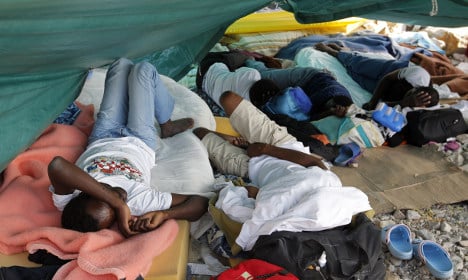 Migrants sleep as they wait in Ventimiglia on the French-Italian border on June, 27th, 2015. Photo: Jean-Christophe Magnenet/AFP

The proposal was put forward by centre-right Eric Ciotti, President of the council of Alpes-Maritimes, a département on the border between France and Italy.

Ciotti raised the controversial idea after voicing concerns that unaccompanied migrants pretending to be minors were being given access to lodging and legal help through the asylum process.

Under French law these services are reserved for under-18s but with the influx of migrants crossing the border from Italy they are at breaking point.

“The children’s homes are now completely full and unaccompanied minors are now being welcomed in hotels,” Ciotti said.

The Republicans party MP suggested introducing obligatory bone tests for all migrants during their four-hour detention period to check whether they are over the age of 21.

The test would consist of a radiograph of the wrist and hand to observe the condition of the cartilage. However doctors have voiced concerns that the test is not reliable for people over 16 years old.

Currently police try to determine ages by checking and verifying any relevant documents carried by the migrants.

Nevertheless the Alpes-Maritimes prefecture says it is considering the idea.

As the Mediterranean migrant crisis deepens, French towns on the Franco-Italian border are seeing an increase in migrant arrivals, many of them unaccompanied minors.

Since the beginning of June, the département of Alpes-Maritimes has welcomed 170 unaccompanied migrants, the same number as for the whole of 2014.

And unlike migrant minors arriving with their families, the rules are different.

“The Italian government now refuses to readmit foreign unaccompanied minors on the grounds that the readmission is not provided for under the Schengen agreements,” explained Ciotti.

Ciotti says he fears that networks of smugglers may exploit these rules by separating minors from their families when they pass the border.