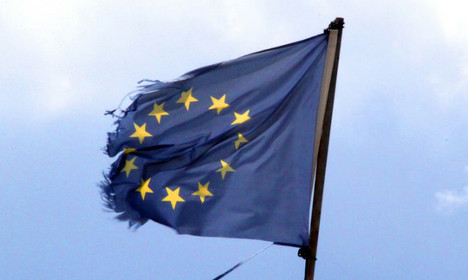 "Give the vote to Brits who know about the EU".Photo: Stephan/FLickr

It appears almost certain that tens of thousands of Brits living in France and other EU countries will be locked out of the UK's EU referendum, that's seems set to take place in late 2016.

While the government has vowed to extend voting rights to all UK expats – including those who have lived abroad for 15 years, there appears to be a lack of political will to make certain that it happens before the referendum.

This has left Brits abroad both furious and fearful that will have no say on an issue that affects them much more than most.

Bob Lewis, the president of the Franco-British Chamber of Commerce in Paris is one of those fighting for the vote. He sends this message to UK Prime Minister David Cameron. 'Give the vote to the Brits who know about the EU'

“It’s not easy to put a number on precisely how many British citizens live abroad, estimates range from several million to more than ten, but what seems to be more and more apparent is that there is no plan to allow them a voice in the EU referendum.

According to recent statements, the Conservative party line on this matter is that eligibility to vote will be subject to the”current rules in place for a general election”.

British citizens who have been living abroad for more than fifteen years will therefore be excluded from any vote.  This is the same fifteen year rule which the Conservative manifesto pledged to abolish.

I can’t be the only person who finds it disingenuous, especially at a time when the EU has noted that only five EU countries (Denmark, Ireland, Cyprus, Malta and the UK) remove voting rights after a specific period abroad.

Indeed, others like France, have even gone so far as to have MPs representing the nationals living and working abroad.

I am not saying that the subject of giving elected representation to non-resident Britons isn’t a thorny one, or that the government isn’t right to want to get it correct.

Where I do object fundamentally is that current rules exclude a rightful part of the British electorate, a part whose voice must be heard because it carries more weight than most.

When the EU project was first imagined as a trading alliance for the coal and steel industry, no attempts were made to disguise that it was designed to bring permanent peace to a continent ravaged by war not once but twice in forty years.

As French foreign minister Robert Schuman said in 1950, his aim was to “make war not only unthinkable but materially impossible” by increasing regional integration.

Us Brits are often accused of being “bad Europeans”, but I would argue that according to the Monsieur Schuman’s vision, many Britons have done more than most to make Europe a more integrated place.

Hundreds of thousands of Britons have made their homes in France, millions in Spain, and many many more can be found living all over the EU.

The accident of language which makes English the lingua Franca of the world may stop us from studying languages as we should, but it also has helped many of us to travel, to drive international business, encourage foreigners to better understand Britain, to be personal ambassadors for the UK and contribute to European society.

Look closely and you’ll find that many Brits have a somewhat ambiguous status with regards to their country of residence.

They maintain a UK address or they commute for work. They are living the dream of the EU’s founding fathers in removing those boundaries between countries.

They have learned that you can be fiercely proud of the positive impact which living abroad makes on their lives and yet remain proud of being British.

I don’t think you have to call yourself a European to be very happy that the UK has offered its citizens the chance to benefit from a broadening of horizons. I’m proud to be British, proud that the UK is a big part of Europe.

These are the very people who should have more say rather than less in any referendum which is likely to have a profound impact on their lives.

Why should a narrow definition of residency exclude people who have not broken the laws of the land, who maintain a British passport and would vote in an election if it were possible?

We have been open to the opportunities which closer European integration has afforded us. We have been pioneers in many ways and we have a duty to make our voice heard.

Our politicians also have a duty to hear that voice and to let us vote in the referendum. We are the British people who are showing not just Europe at its best but also representing Britain at its best in Europe.

We banish most of the stereotypes, we are proud of the country, we know Britain is GREAT, our British cuisine isn’t terrible, we do try to speak the local language and we don’t moan about the weather all the time nor act like we are in a colonial outpost.

The more we mix with people the more the barriers come down, and we recognize our similarities rather our differences.

So I call on David Cameron to give us a voice in the referendum.

Tackle the 15 year rule as a separate subject if you wish, but give a vote to us experts who know a thing or two about what membership of the EU really means. What is there to be afraid of?”

The original article appeared on the website of the Franco British Chamber of Commerce. You can view it by clicking here.