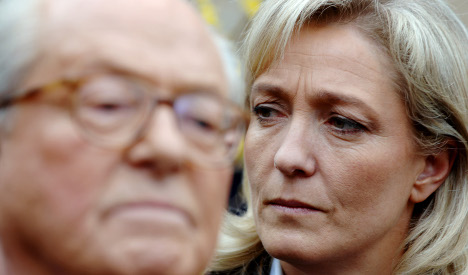 Embroiled in a bitter feud with his daughter Marine who now runs the FN, Le Pen announced last week he was taking legal action to try and prevent the party from changing its statutes and scrapping his post.

More than 50,000 party faithful had until Friday to vote on the issue by postal ballot.

But a court in the Paris suburb of Nanterre said it had decided to postpone the ballot “until the organisation of an extraordinary general meeting which complies with current statutes.”

This is a second victory for the 87-year-old party founder, whose suspension from the party in May was overturned by a court last week.

Le Pen was evicted over a string of controversial remarks that led to a vicious row with his daughter, whom he publicly disowned.

Marine decided enough was enough after her father repeated his view that the Nazi gas chambers were merely a “detail” of history and also claimed France had to get along with Russia to save the “white world”.

But a court ordered her to restore his membership as his suspension had “violated statutory rules” by not specifying it was a temporary measure pending a disciplinary procedure.

Marine brushed off that decision as a “Pyrrhic victory” for her father ahead of this week's vote which was expected to strip him of his honorary presidency.

But the ruling blocking that vote will come as a blow to the 46-year-old party leader who announced last week she would compete in regional elections later this year that are considered a key test ahead of presidential polls in 2017.

While the FN remains anti-EU and anti-immigration, it has worked hard to soften its image since Marine took over in 2011 and has seen its popularity soar, enjoying a series of election successes.

Several polls have shown she could pose a serious challenge to the conservative Republicans of ex-president Nicolas Sarkozy as well as the ruling Socialists in 2017.