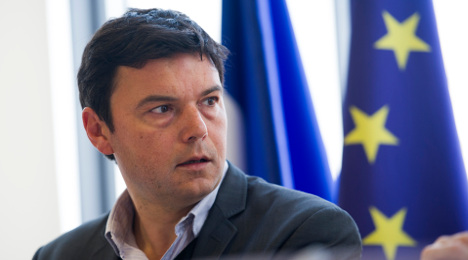 Thomas Piketty has scolded Germany for its treatment of Greece. Photo: AFP

Piketty believes a Grexit would be a catastrophe for the euro and could “spark the beginning of the end” for the single currency.

The author of the acclaimed work Capital in the 21st Century  has been a stern critic of how Europe has tried to handle the country’s debt crisis and on Tuesday he laid into Germany, blasting it as the “country which has never repaid its debts”.

In an interview with France Info on Tuesday – the same day Eurozone leaders meet in Brussels for an emergency summit – Piketty repeated a point he has been making in recent days.

“What struck me was while I was writing my book is that Germany is truly the best example of a country which throughout its history has never paid its foreign debt,” he said.

“Neither after the First World War or the Second. Germany is the country that has never repaid its debts so it’s not legitimate to lecture other countries,” said the economist.

“Europe was founded on debt forgiveness and investment in the future, not on the idea of penance,” said Piketty, whose best-selling book on the widening gap between rich and poor earned him a visit to the White House.

Piketty admitted the Greeks have made mistakes, but said “we cannot ask younger generations to pay for the mistakes of their parents for decades.”

Piketty’s pleas are likely to fall on deaf ears on Tuesday as European leaders meet in Brussels for what’s seen as the last chance to find a deal to prevent Greece from crashing out of the euro. But Germany and France have made it clear so far that the ball was in Greece’s court and various Eurozone leaders seem more and more convinced that Greece needs to dumped.

Piketty had words of warning for those in favour of cutting Greece a drift.

“Those who think that we will stabilize the eurozone and encourage discipline by expelling a country are dangerous sorcerer's apprentices,” he said, suggesting that if Greece leaves Europe could face even deeper crises to come.

The economist has been heavily critical of the way the eurozone has been run since the debt crisis in 2008.

He recently told The Local and other members of the Anglo-American Press Association that if Greece was allowed to leave the eurozone it would spark “the beginning of the end” for the single currency.

“It would be a catastrophe for the eurozone if Greece were pushed out. It would be the beginning of the end of the single currency,” he said.

“People every morning would be asking ‘who will be the next to leave?’ That would be the beginning of the end. And the governments of France and Germany have not prepared public opinion for such an eventuality; they would have to do that very quickly.”

Piketty has also slammed the way the talks over the Greece crisis have been held in almost secrecy.

“This is a perfect example of why we need some political involvement in the economic policy surrounding the single European currency,” he said.