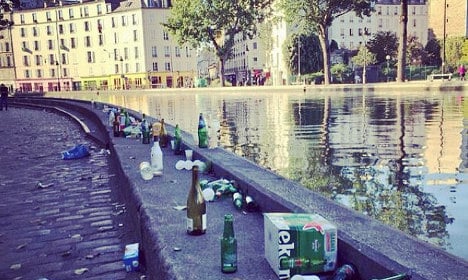 The Canal Saint-Martin is considered one of the coolest parts of the French capital, drawing thousands of Parisians and tourists alike who come in the evenings to drink and picnic.

It was immortalised in the films Amélie and Hotel du Nord.

The iron bridges, shaded tow paths and numerous bars and bistros make it the place to be for young and trendy locals, or “bobos” (bohemian but bourgeois) as they are known in Paris.

During the long summer nights there is barely room to swing a baguette. But after a scorching heatwave saw the quays packed with revelers for several nights the canal looks like a place more synonymous with dumpsters than hipsters.

And residents have had enough.

A new blog, by the Collectif du Canal Saint-Martin paints a sorry picture of one of the most picturesque Parisian neighbourhoods having been transformed into one big rubbish tip and outdoor urinal.

In a series of Instagram posts published on the blog titled ‘Welcome to Canal Saint-Martin’, beer bottles litter the vomit-stained pavement, while the ducks in the canal are forced to weave their way through cigarette butts and plastic packaging.

“The canal is no picture postcard. It's not Amélie or Hotel du Nord, it's a jungle. One big rubbish bin,” a member of the Collectif du Canal Saint Martin told The Local.

“The situation now is serious. We have to walk through broken bottles, vomit, rubbish and urine every morning,” said the resident, who declined to give her name. “A nearby school caretaker cannot let pupils in the premises on a Monday morning until he has washed away all the urine.”

The Collectif say they don't want to ban people from having a drink or a picnic by the canal but are asking the revelers, most of whom come from outside the area, to take responsibility for their mess.

“These people just don't have any respect for the neighbourhood. We don't want it to be banned but something must be done.”

Many residents have also taken to the Welcome to Canal Saint-Martin Facebook group to express their frustration
“I’m more than fed up with these people who have a party in the evening and it’s us who endure it in the morning!” writes Corinne Arama.
One canal resident, Silvia from Spain, sums up the problem.

“It's disgusting. People come to drink and to eat and then just bugger off without cleaning up their mess,” she told The Local.

A few of the residents have even been forced to put up notices on their doors to stop people from urinating on them.

One notice reads: “This door is the entrance to our building. Be nice and go and urinate elsewhere.”

Local residents have been battling against the Town Hall in the local 10th arrondissement to do something about the problem.

Xavier Simonin, who is head of the mayor’s office in the 10th arrondissement, says the Town Hall is aware of the problem for many years.

“We need to clean more but also educate people more so they can be more respectful to the environment and the residents,” Simonin told The Local.

He said the problem had flared up recently due to the heatwave.

He added that several measures had been taken by the council both to discourage people from littering, including large signs along the canal encouraging partygoers to adopt a respectful attitude.

Other measures include the installation of more urinals, bottle banks and bins, which are emptied four times a day. For the first time, there are also toilets available for women.

Musical instruments are also regularly seized, with around 70 confiscated by police last year, according to the site 20minutes.

“Without these the situation would be much much worse.”