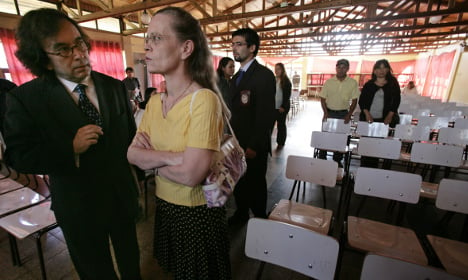 Judge Sylvie Gagnard (C), of the financial section of Paris court, listens to a Chilean lawyer before a hearing with victims of the fraud known as 'quesitos magicos' (magic cheese). Photo: Claudio San

Gilberte Van Erpe, 74, also received an additional three-year suspended sentence for her vast scam in which she told victims the product they could make at home was a prized ingredient used in creams favoured by celebrities such as Michael Jackson.

But the goop was worthless and the scam became one of the biggest pyramid schemes ever seen in South America.

The “case of the magic cheese”, as it is known in France, began in 2005 when the businesswoman dubbed “Madame Gil” held conferences around Chile urging people to become home producers of the fermented product.

Her company, Fermex Chile, had some 20 branches around Chile.

For €369 ($413) investors could buy a kit containing filters and a special powder which when mixed with milk and fermented, produced a small cheese pat they were told was highly sought after by the cosmetics industry.

Fermex promised that companies like French cosmetics giant L'Oreal would snap up the cheese for use in whitening creams and other products.

That is, after they were sold to a company in Congo-Brazzaville which would sell them on to France.

Victims were told they could double their initial investment in four months.

To entice the first victims, the kits were given away for free, and people were paid for their first batches of exported “magic cheese”, convincing them to reinvest their earnings.

The success of the business initiative spread rapidly and a Chilean investigation showed some 5,500 people were ensnared.

Many families mortgaged their houses or became heavily indebted to invest in the pyramid scheme, which raked in 14.5 million euros for the alleged scammers.

Like most pyramid schemes the scam relied on rapid growth, with initial investors telling their friends, neighbours and family about its profitability and getting them to join.

Victims were spurred to sign up friends and family with the promise of gifts and reward money.

One person received a cheque of 100 million pesos for their recruitment skills, that turned out to be fake, investigations showed.

As for the “magic cheese”, it never even left the country and a Chilean journalist later found tonnes of it rotting in a warehouse.

The scam collapsed in July 2006 and Van Erpe was arrested in the southern French city of Nice in 2008, but it was not possible to extradite her.

Chilean authorities thus pursued her in France where she stood trial alongside three alleged accomplices.