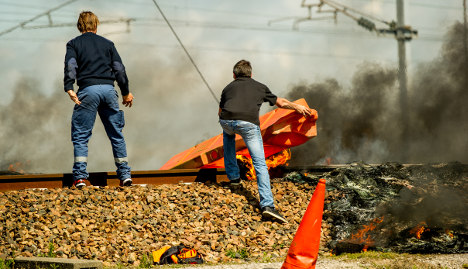 “Mob rule” by “aggrieved militant Frenchmen” must not be allowed to keep disrupting trade at Britain's Port of Dover, its chief executive said Monday, after a wave of strikes by ferry workers.

Workers from French company MyFerryLink have held a series of protests over plans to sell off some of the firm's ferries, which could result in job cuts.

This has disrupted freight and passenger travel on both sides of the Channel.

Migrants based in Calais have also tried to break into vehicles blocked by the strike action and the Channel Tunnel terminal in a bid to cross into Britain.

“How could you equate the importance of keeping such valuable trade moving with the incredible disruption caused at a major international gateway — Calais — by the mob rule of a small number of aggrieved militant Frenchmen? We certainly cannot,” Waggott wrote.

“Unless supermarkets with empty shelves and assembly lines with vital parts missing are to become acceptable, then clearly under no circumstances should the recent situation be allowed to happen again.”

Waggott stressed that Dover had remained open for business throughout.

But he urged the government to start considering how to ensure that “a £100 billion trade route can do its job 24/7, unimpeded by others for the long term.”

The Port of Dover handles 13 million passengers each year.

Prime Minister David Cameron's spokesman said Britain was working closely with France to stop the blockades but added: “There does remain a possibility of further disruption and travellers should check travel advice and with their operators.”