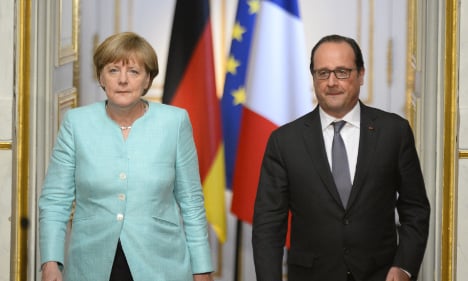 French PM Manuel Valls suggested Paris and Berlin were not quite on the same wave length on Tuesday saying France can't take the risk of Greece leaving the eurozone.

Valls, who proposed a debate in the country's parliament, said a “Grexit” would have an impact across the globe adding that the basis for a deal with Athens was there.

“France is convinced that we can't take the risk of Greece leaving the eurozone,” a move that would affect economies across the globe, Manuel Valls told French radio. “The basis for a deal exists… There is no taboo subject when it comes to (Greek) debt, on the restructuring.”

“France will do everything so that Greece remains in the eurozone because that's where it belongs, at the heart of the European project,” he said.

Those words were in contrast to German Chancellor Angela Merkel's words on Monday night in Paris when she said the conditions for a new Greek rescue package “have not yet been met.”

Positions among Greece's 18 partners in the eurozone vary ahead of Tuesday's emergency summit of European leaders.

Germany, Finland, Slovakia and the Baltic states have taken a notably harder line, whereas France, Italy and Spain have adopted a more conciliatory tone.

On Monday Germany and France presented a united front when leaders of both countries called on Greece to make detailed proposals to revive bailout talks, a day after the dramatic referendum result.

With Greece's economy gasping for air, the authorities extended an eight-day bank closure until Thursday amid fears cash machines in the country were running dry.

The European Central Bank, which has been keeping Greek lenders afloat, meanwhile announced it would maintain a key financial lifeline to Greek banks, but raised the bar for them to access the emergency funds.

“It is now up to the government of Alexis Tsipras to make serious, credible proposals so that this willingness to stay in the eurozone can translate into a lasting programme.”

Premier Tsipras is to unveil his government's proposals on Tuesday at a hastily-arranged emergency summit of the 19 eurozone countries in Brussels.

For her part, Merkel said the conditions for a new Greek rescue package “have not yet been met.”

“And that is why we are now waiting for very precise proposals from the Greek prime minister, a programme that will allow Greece to return to prosperity,” said Merkel, adding that eurozone countries had already shown “a lot of solidarity with Greece”.

SEE ALSO: Does France really have nothing to fear from a Grexit? As Athens awoke after a night of celebration after the 'No' camp won a closely-watched referendum on bailout terms, Greece's firebrand finance minister, Yanis Varoufakis, announced he was stepping down to try to ease friction with creditors.

Varoufakis had infuriated European counterparts by lashing demands for economic reform and welfare cuts as “terrorism” and “fiscal waterboarding.”

He was replaced by Euclid Tsakalotos, a much more discreet junior foreign minister and economist who has been Greece's pointman in the negotiations with creditors.

“We want to continue the discussion,” said Tsakalotos, who admitted to having “stage fright” upon assuming the post “not at the easiest moment in Greek history”.

The White House urged all parties to seek a compromise that would keep Greece in the euro zone and place its economy “on a path toward debt sustainability but also economic growth.”

Despite its tougher approach on debt relief, Germany said Monday eurozone leaders should discuss humanitarian aid for a country fatigued by years of belt-tightening and chronic unemployment.

In Sunday's plebiscite, Greek voters voted by 61.31 percent to 38.69 percent to reject austerity terms in exchange for releasing more funds under an international bailout package.

The result dealt a body blow to the vision of European integration, but elated parties campaigning against austerity and loss of national sovereignty.

Many Athenians awoke Monday yet again to the grim reality of closed banks and more lines at cash machines to make their daily withdrawal limit of 60 euros ($67), as fears grew the ATMs could soon run dry.

“I'm very afraid we will get no cash anymore in the coming days. They really have to fix it, end of this week at the latest, otherwise it (the economy) is collapsing,” said pharmacist Lambros Vritios.