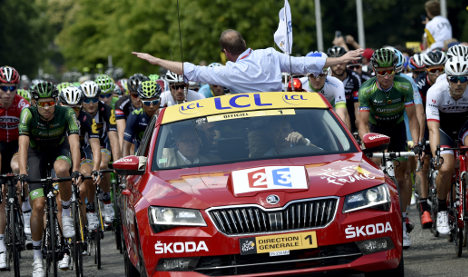 Race chief Christian Prudhomme signals that the race has been "neutralised" after the crash. Photo: AFP

Numerous riders were forced to abandon the Tour de France on Monday after a huge crash on stage three of the race.

The stage had to be temporarily stopped after the crash left doctors forced to attend to injured riders.

Several riders were seen writhing in agony while neck braces had to be fitted to others.

It occurred FDJ rider William Bonnet went down and others just careered into the back of him.

Nasty crash in the #TDF2015 http://t.co/droEpXFJYC

Speaking on BBC radio Five former Great Britain cyclist Rob Hayles described the crash: “When the crash happened there were a good 30 or 40 riders who went down. It looked like there was a big pylon where a lot of them ended up, hopefully none of them hit it.”

Race chiefs neutralised the stage for a while, to allow doctors to attend to the injured.

The race began again soon after with some of the injured riders clearly in discomfort.