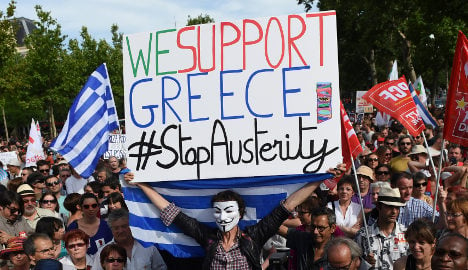 Protesters in France show their support for Greece. Photo: AFP
French president François Hollande is wasting no time after the Greek referendum on Sunday.
After the people of Greece overwhelmingly told the country's creditors to come back with a better offer Hollande is desperate for a solution to be found to avoid the possibility of Greece stumbling towards to the eurozone exit door.
He will meet with German Chancellor Angela Merkel in Paris on Monday night before heading to Brussels for crisis summit of EU leaders on Tuesday.
But why are president François Hollande and co in such a panic? Would a Greek debt default and a subsequent Grexit be that bad for France?
What exactly can the French expect from a default?
The answer, says experts and politicians alike, is not much, well at least at first.
If Greece does not pay its debt “we are not going to ask the French to write a cheque,” said Agnès Benassy-Quéré, an economist at the Paris School of Economics. “There will be no short term impact for the French.”
Fabien Tripier, an economics professor at the University of Lille-I, said the size of the Greek economy is not big enough to have a major impact on France.
“[France] is not going to have to increase taxes tomorrow to compensate for Greece not paying up,” said Tapier who points to the fact that Franco-Greek commercial relations are not that developed and the Greek financial system is now pretty independent from other EU countries.
For their part French politicians have been busy stressing that there was nothing to worry about for the public. “The French economy is robust”
President Francois Hollande said before the refernedum that “the French economy has nothing to fear”, and was “more robust than it was four years ago”.
Hollande was speaking after gathering key ministers together last week for an emergency meeting on the matter.
The president's comments follow a similar sentiment from Prime Minister Manuel Valls who said the “the French economy would not be affected” if Greece decided to leave the euro zone.
Tomasz Michalski, Professor of Economics at HEC business school in Paris tends to agree and suggests the Greek crisis has actually been good for France, in some ways.
“The fact that the euro has remained weak has helped France boost exports to countries outside the eurozone like the US, UK and Switzerland,” Michalski told The Local.
“For the last five years people have been preparing for this. French banks have got rid of Greek assets from their books, meaning only certain hedge funds and national governments are exposed.
“But the money that is owed France – about two to three percent of its debt – was not going to be repaid in the short term if at all.
“Things would be different however if it was Italy or Spain,” he said.
But for economics professor Tapier the impact of a Grexit on France will not be negligible.
“One of the main impacts will be on the cost of borrowing for France, whose rates could rise and that would obviously mean bad news for the French economy,” Tapier told The Local, although he says those interest rates for sovereign debt will more likely rise for countries with weaker economies like Spain and Portugal.
“We could see an impact even in the next few weeks,” he said, with the French state, which already has two trillion euros of public debt, losing money.
This rise in rates could then impact negatively on France's commitments to Brussels to cut its public deficit in the future.

Finally, a good overview of which countries borrowed to #Greece. pic.twitter.com/buqJV3YscA

France has a total of over €42.4 billion, or €644 per resident invested in Greece, that it could lose in the event of a Grexit, but Tapier says the debt is invested over the long term so unlikely to impact on immediate budgets, but may well in the coming years.
“Independent of the Greek crisis, the French economy is fragile and its recovery is very fragile,” says Tapier. “So anything that can destabilize the economy is not good news for France.”
SEE ALSO: French support keeping Greece in eurozone Perhaps for the moment the greatest impact of a Greek default and a Grexit will be felt by those French people who are heading to Greece on holiday this summer.
Up until now they seem largely unconcerned and are flocking as usual to their favourite summer haunts.
“There is no reason not to go on vacation. Our only worry is whether it is going to be sunny,” Jean-Pierre told the AFP news agency before leaving the Charles de Gaulle airport for a trip to Crete.
But travellers have been advised to take cash, even though the ATMs in Greece should be working as normal for anyone with a foreign bank card.
But most economists argue the main impact of any Grexit on France would be that the whole eurozone would be weakened and once Greece leaves, the doors may remain open for the next country which faces a crisis.
“The eurozone is not designed for countries to leave, there's no mechanism for that, but if Greece does go, then the next time a country faces a crisis, the temptation will be to devalue and leave,” Tapier told The Local.
That's a view shared by French economist Thomas Piketty, who earlier this year told The Local and other foreign reporters in Paris that a Greek exit would “probably be the beginning of the end for the eurozone.”