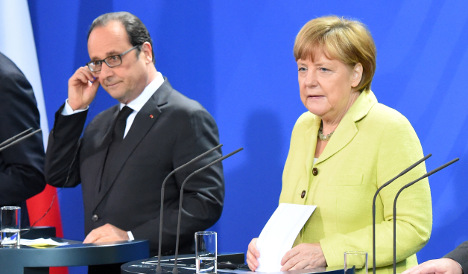 The heads of the the eurozone's tow biggest economies were due to hold talks in Paris on Monday, a day after the Greek people voted overwhelmingly to reject more austerity.

Both governments in Berlin and Paris essentially stuck to the same line on Monday, that the ball is essentially Greece's court after the referendum vote.

The pair were due to make a joint statement to the press on Monday evening.

Hollande spoke to Tsipras on Sunday night as it became clear that Greek voters had overwhelmingly voted “No” to more austerity.

According to Le Monde newspaper Hollande urged Tsipras to soften his position so a deal could be achieved.

The conversation, which took place in English and French was pretty “direct” and Hollande told Tsipras of the gravity of the situation.

“Tsipras must show that he is ready to negotiate,” a government source told Le Monde, who added that there is a real risk of Greece leaving the Euro even if Paris is ready to do everything to avoid it. Sapin said it was up to the Greek government to make new proposals after a referendum rejecting creditors bailout proposals.

“The vote itself solves nothing,” Sapin said, adding that the margins for dialogue were “very thin”.

Sapin said Athens needs “to prove that it is serious about dialogue”.

“If Greece makes serious, and solid proposals, then solid discussions could follow,” he said. Meanwhile French government spokesman Stephane Le Foll said “no one among the leaders involved has expressed the wish to kick Greece out” of the eurozone.

“So we must get back into a situation where we must talk.”

Chances of dialogue succeeding may be increased after Greece's provocative finance minister Yanis Varoufakis stepped down on Monday.

On Saturday he appeared to have crossed the line when he accused Greece's creditors of terrorism.

The result, which saw the “No” vote vote backed by around 61 percent of the Greek population, has exacerbated Germany while France's ruling Socialist party wants the EU to come to a “brave” compromise.

“We must have a policy that's a little bit braver to enable Greece to survive and to allow Europe to correct its defects,” said France's Socialist party boss Jean-Christophe Cambadélis.

However those on the French right called for Greece to be ushered out of the euro.

Alain Juppé from Nicolas Sarkozy's centre-right Republicans party called on the EU to organise Greece's exit from the eurozone “without any drama”.

“Greece is no longer capable of sticking to the disciplines of the eurozone,” said Juppé.

Germany's vice chancellor Sigmar Gabriel took a dim view of the message sent by austerity-addled Greeks after they rallied to a call by Prime Minister Alexis Tsipras for a boosted mandate to pursue a more lenient debt deal that includes debt forgiveness.

Leading the reaction from Germany, Gabriel, who heads the centre-left Social Democratic Party that shares power with Chancellor Angela Merkel's Christian Democrats, accused Tsipras of having “torn down the last bridges which Europe and Greece could have crossed to find a compromise.”

“By saying 'No' to the eurozone's rules… negotiations over billions of euros in bailout programmes are difficult to imagine,” Gabriel told his country's Tagesspiegel newspaper, referring to Greece's request for a new bailout programme.

A German government spokesman said in a later statement that Merkel had discussed the outcome of the vote with Hollande in a telephone call, before talks will continue on Monday evening.

SEE ALSO: 'France has nothing to fear from a Grexit' The chancellor, an advocate of austerity, and Hollande, who spoke Sunday night by phone with Tsipras, were “in agreement that the vote by the Greek people be respected,” the spokesman said.

The leaders of the eurozone's two biggest economies also called for a summit of eurozone leaders on Tuesday — a request rapidly granted by EU Council President Donald Tusk.

The European Commission issued only a terse statement on the vote, saying it “respects” the result and that Commission president Jean-Claude Juncker — who had lobbied for a 'Yes' vote — would hold a teleconference Monday with Dijsselbloem and Mario Draghi, head of the European Central Bank, whose emergency loans have been keeping Greek banks afloat.

Anti-austerity and eurosceptic parties were heartened by the Greek rebuff to the EU, with spontaneous rally taking place at Palce de la Republique in Paris on Sunday night, led by lefist Jean-Luc Mélenchon. (European MP and former president of the left-wing party Front de Gauche Jean-Luc Melenchon (C) gestures during a rally in support of the people of Greece at Place de la Republique.)

“EU project is now dying. It's fantastic to see the courage of the Greek people in the face of political and economic bullying from Brussels,” the leader of Britain's eurosceptic UK Independence Party Nigel Farage wrote on Twitter, praising the Greeks for “calling the EU's bluff”.

Spain's radical left Podemos party, an ally of Greece's ruling Syriza party, also cheered the result, which comes ahead of a general election later this year in Spain in which the left is tipped for gains.

In a sign of the nervousness of Spain's conservative government about the possible political contagion from Tsipras' victory Sunday, Prime Minister Mariano Rajoy called an emergency meeting on Monday with senior officials including his economy and finance ministers.