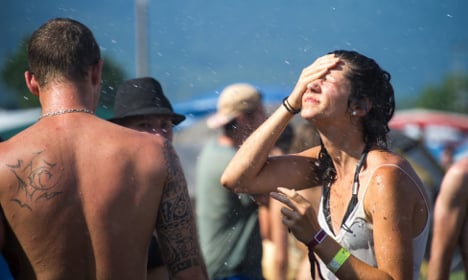 People enjoy the mist from a water sprayer at the entrance of the 27th Eurockeennes music festival site in Belfort on July 4th. Photo: Sebastien Bozon/AFP

Parts of central and eastern France are set to sizzle for a few more days, with sixteen départements still on high alert for the heatwave on Monday, while temperatures remained high across the country.

A total of sixteen départements remained on orange alert for the heatwave on Monday, the second-highest alert level, which requires the public to be vigilant. While much of France was starting to cool down after last week's punishing temperatures, the sun remained out across the country on Monday. (See weather map below). In the south west and the north east the maximum temperatures will be 35.

Things are finally set to cool down on Wednesday when the record-breaking heatwave, which has caused havoc for travellers and commuters this past week, will finally fizzle out.