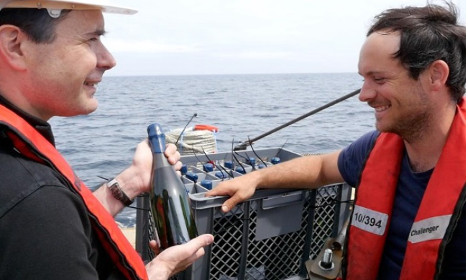 Is storing wine in the sea the future? Photo: Credit Agricole GC

Numerous fine wines from Bordeaux and Burgundy have been lowered to the bottom of the Atlantic Ocean, off the coast of Brittany in western France, where they will be stored for a number of months.

The bottles were stored 90 metres under the surface of the Ocean near Ile d’Ouessant in western France at the end of last month.

All the wines belong to the firm Crédit Agricole Grands Crus, who handed them over to the firm Amphoris, which is in charge of carrying out the experiment and specializes in the storing of wine and champagne in the ocean.

“The sea brings together the ideal conditions for aging and improving wines,” said a statement from Crédit Agriciole Grands Crus.

“The wines have been specially chosen for aging under water, which can bring changes to the bottle as well as the product.”

Essentially by storing the wine in the sea it can speed up the aging process.

At the bottom of the sea “there is never daytime and the temperature remains the same all year round,” read the statement.

The wines will remain at the bottom of the Atlantic for between nine and 24 months.

However one problem the sea has that a traditional wine cellar doesn’t is that it can get pretty rough, especially the Atlantic on France’s western coast.

To counter the possibility that the bottles will be washed away or smashed to pieces on the sea bed, special racks have been designed to withstand storms.

All the bottles are also sealed with wax.

“At the end of this lengthy submersion a special wine tasting will be organized, to compare the aging of the wines to those that remained in their chateaux cellars,” said Crédit Agricole Grands Cru.