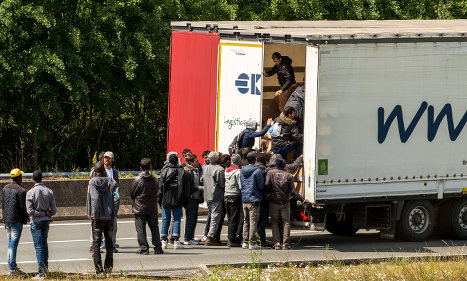 Migrants climbing into the back of a lorry in Calais, northern France. Photo: Philippe Huguen / AFP

“From 10:30 pm (2030 GMT), around 150 migrants attempted to enter the platforms,” a spokesman for the Pas-de-Calais prefecture in northern France told AFP.

The spokesman said traffic was interrupted, with long queues of cars forming, but an AFP journalist said it resumed around two hours later.

The migrants “seek to cross the Channel by any means”, a Eurotunnel spokesman said, adding that the tunnel “suffers from attempted intrusions every night”.

“We have adapted our transport system to ensure the best level of security and keep our trains running,” the spokesman added.

Around 3,000 migrants are currently camped out around Calais in northern France and are trying to cross the Channel into Britain.

The crisis topped the political agenda again in the past fortnight as ferry worker protests at the port led to many migrants breaking into stationary vehicles.

France and Britain signed an agreement last September, creating a fund of five million euros ($5.6 million) per year to help Calais cope with the influx of migrants.

The money was supposed to go to reinforcing security around the port and access to the Channel Tunnel.