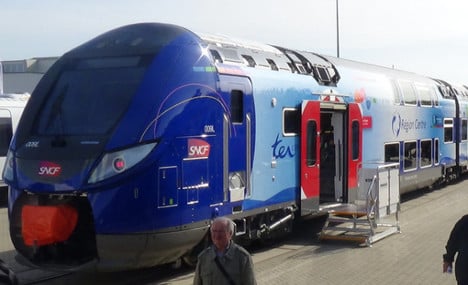 New TER trains are just a little too tall to make it through the tunnels to Italy. Photo: Julian Ghein1/flickr

French rail operator SNCF had ordered the new trains to absorb the increased passenger numbers on the line between France and Italy, but they may have used a dodgy measuring tape.

According to a report in Nice Matin newspaper, the new regional TER trains are just too high to pass through the tunnels between the two countries.

The bungle echoed a similar gaffe last year when French rail operators admitted they had to adjust 1,300 platforms after ordering hundreds of new trains that were too fat for stations, costing them €50 million.
The latest mishap came about after French rail operator SNCF ordered new and Regio 2N trains from Bombardier to serve the TER line that serves the Riviera coastline between Les Arcs – Draguignan and Vintimille around the French-Italian border.
The trains have a greater capacity than those that are used currently and were ordered to help cope with the rising numbers of passengers who use the line – around 130,000 daily.
They were delivered last November, but have not made it out of the yard, because they are a few millimetres too high. The gaffe was revealed by former railway workers group, ironically named “The shipwrecks of the TER”, in reference to France's problem-hit regional train service.
“The SNCF has confirmed to us that the Regio 2N trains that were to be finally delivered in July would not go further than the town of Menton because they did not pass under the tunnels,” Eric Sauri, president of “The shipwrecks of the TER”, told Nice Matin.
But the chief executive of the French national railway company SNCF Guillaume Pepy played down the concerns.
“When you put something into service, sometimes it's necessary to take a look at it, there may be a signal problem here, or the start of a platform that is troublesome. But it can all be easily dealt with,” said Pepy, noting that the new trains are set to roll out from July 5th.
The new trains will indeed roll out in July but they will only go so far as Menton, on the French border, after which it will be necessary for many passengers to change trains.
It might not be until November that the trains come into use across the entire line, as work to shave a few millimetres off the tunnels is not due to begin until the autumn.