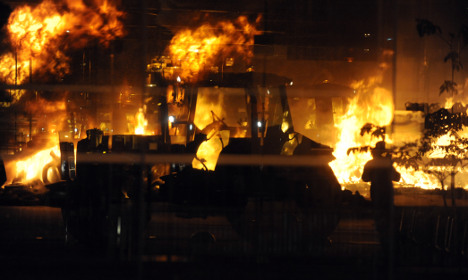 After taxi drivers and ferry workers it was France's farmers who were the latest group to send a message to the French government on Thursday, when they held protests to raise awareness oftheir plight.

The protests, mainly held in the west of the country, were organised under the name “night of distress” to try to raise attention to the plight of French farmers, whether cattle breeders or dairy producers.

The farmers, fed up with low prices for their produce, held go slows on roads in the west of the country and dumped manure outside big supermarkets, who they blame for keeping prices down.

They claim the low price of pork, beef and milk doesn’t allow them to even cover their costs. (A French farmer stands near burning tires during a demonstration in Saint-Brieuc on July 2, 2015. AFP) (French farmers with a signs attached to their tractors that reads “Breeders in Distress” (L) and “Farmers in Distress” roles along the RN 12 between Lamballe and Saint-Brieuc, western France to protest against the low price purchase of their production. AFP) (Earth and manure have been dumped by farmers and breeders demonstrating against the drop in prices outside a commercial center building in Rennes, northwestern France, on July 2. AFP) (President of the French union FNSEA Xavier Belin (2ndL) sits in the shovel of a farm tractor along side other farmers on July 2, 2015, as a convoy of farm vehicles rolls along the RN 12 between Lamballe and Saint-Brieuc, western France. AFP) (French farmers and breeders, with tractors and pigs, protest outside the prefecture of Saint-Brieuc, western France. AFP) (Farmers put into place a sculpture to mark the 50th anniversary of “Yoplait” in the center of Vienne, central-eastern France, on July 2, 2015, to protest against the destructive politics of the company on the producers of milk. AFP)