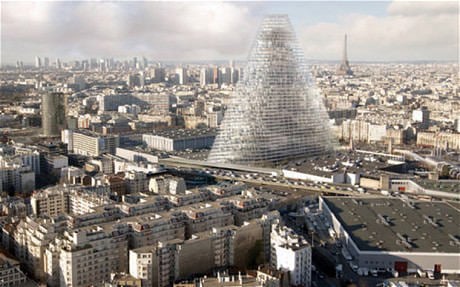 The controversial Triangle Tower will see the light of the day. Photo: AFP

Considered the pet project of Paris's new mayor Anne Hidalgo, the planned construction of the 40-floor-high pyramid-shaped tower, or the “Tour Triangle” as it is known in French, will finally go ahead.

It had hit a snag last November when councillors narrowly voted against it, but that vote was annulled by Hidalgo.

In the re-vote on Tuesday night the outcome was different and the Tour Triangle was given the stamp of approval after getting 87 votes for and 74 against. At a height of 180m (590 feet), the proposed pyramid would be the third-tallest building in the capital after the Eiffel Tower (301m) and Montparnasse Tower (210m).

Designed by the Swiss agency Herzog and De Meuron, who were the architects behind the famous Bird's Nest Olympic stadium in Beijing, the building project is estimated to cost a whopping €535 million.

It will be built in the 15th arrondissement, where residents have fiercely opposed it and where it will dominate the southern skyline of the city.

It will eventually be home to a 120-room four-star hotel, 2,200 square metres of “co-working” office space and a cultural centre.
There will also be an auditorium, the obligatory panoramic restaurant, 1,600 square metres of shops, a creche with places for 60 children and a care home.
While Greens say it is not energy efficient Hidalgo has pointed to the creation of 5,000 construction jobs and another 5,000 permanent jobs once it is built.
But it has been beset by controversy, not least last year's overturned council vote.

Mayor Hidalgo had protested the legitimacy of the first ballot after some councillors – prior to the vote – publicly disclosed which way they intended to vote, despite it being a secret ballot.

Citing case law of the Council, Hidalgo argued that since the difference of votes was less than the number of ballots publicly disclosed, the latter should not be taken into account, consequently nullifying the ballot.

The mayor’s decision was criticized by former mayoral candidate, council member and MP Nathalie Kosciusko-Morizet from the UMP party as a “denial of democracy” while others simply accused her of being a “bad loser”.

For her part Hidalgo says: “Paris needs this project. We would be the only city in the world to refuse €500 million of investment in a time of economic depression.”