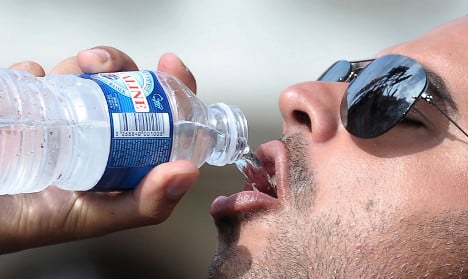 The heatwave continues to scorch most of France. Photo: AFP
Heatwave latest:
The heatwave in France continues to get stronger, with France's weather agency Météo France upping the total number of départements on orange alert warning from 40 to 47 on Wednesday afternoon.
An Orange warning is the second highest warning level and asks the public to be “very vigilant”.
The agency added the départements of Alsace, Ardennes, Isère, Moselle, Savoie, and Haute-Savoie to the 40-strong list, which includes all the départements within Bourgogne, Ile-de-France, Franche-Comté and Limousin, as well as Ain, Allier, Cher, Dordogne, Indre, Loire, Loiret, Lot, Lot-et-Garonne, Puy-de-Dôme, Aisne, Aube, Marne, Haute-Marne, Meurthe-et-Moselle, Meuse, Nord, Vosges, Cantal, Haute-Loire and Rhône. Wednesday afternoon has been a scorcher across the entire country, with Paris recording temperatures of 39C, as well as 38C in Limoges, 37C in Nantes and over 40C in Gironde, Le Parisien newspaper reported.
France's weather agency Météo France has dubbed the heatwave as one of the strongest in the last ten years, the kind of which hasn't been seen for more than six decades.
Below are weather maps showing Wednesday afternoon, followed by Wednesday night. Most of the country won't see the temperatures drop below 20C during the night. The heat even saw electrical problems at the Saint-Lazare train station in the capital, leaving passengers with no option but to walk along the tracks (see picture below).

The rising temperatures remain a worry for electrical network company RTE, which saw one of its electricity transformer overheated on Tuesday night leaving 800,000 homes in western France without power.
The first power cut occurred at around 8.30pm and saw lights go out in St Malo, Dinan and Dinard before a second outage occurred further south near Vannes, that left hundreds of thousands without electricity in Brittany and parts of the Vendée.
As well as homes turning dark, cinemas screens turned off and restaurants were emptied, reported newspaper Le Parisien.
On Wednesday morning the town of Vannes was still struggling with traffic lights not working and reported queues for bank machines.
“These incidents are without a doubt related to the hot weather,” Didier Bény at RTE told France Info radio.
“To have an impact like this on the customers is quite exceptional.”
While the problem was fixed by Wednesday morning – network company RTE warned that similar outcomes may occur again.
However, half of France can look forward to a brief respite as storms in the north west on Thursday are predicted to cool down the western half of the country, but the temperatures will rise again on Friday and stay high over the weekend.
After 15,000 mostly elderly people died in a heatwave back in August 2003, the government launched an emergency response programme in which authorities can raise a three-tiered alarm system to ensure there won't be a repeat. People are advised to drink water regularly, even when not thirsty, in order to remain hydrated. It is also wise to avoid any physical exertion and try to cool down as often as possible by taking cold showers.
The general advice is to keep the air conditioning on during the day and get the windows open at night.
SEE ALSO: How to keep cool in this week's heatwave (Parisians cool off in the summer sun. Photo: AFP)
Below is a map showing the weather for Thursday afternoon.