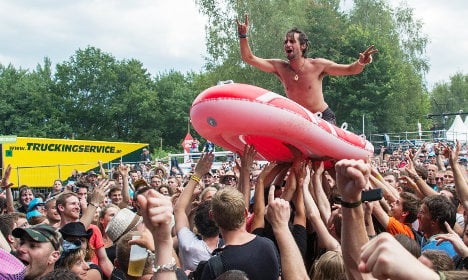 (Lavender fields in Provence. Photo: AFP)
Head down to the ever-charming Provence in southern France to experience what must be the nicest smelling festival in the world – the Lavender festival. The flowers are in full bloom over the next two months (the festival runs until the end of August), so you've got plenty of time to see anything and everything when it comes to the purple jewel of southern France. More info here.
Festival d'Avignon, July 2nd to 26th, (Performers put on a free show in Avignon at the 2014 festival. Photo: AFP)
Founded in 1947, this is one of the most respected annual arts festivals in France – and it's it's going to be big. This year's show has a budget of €13.3 billion and expects to bring in €26 billion (check out some other facts and figures for the 2015 show). It will have around 50 shows in 20 locations for around 300 performances, with room for 500 journalists from around France and the world. It runs until the July 26th. Tickets and more information here.
Eurockéennes de Belfort Festival, July 3rd to 5th (Prepare for wild times at the Eurockéenees festival. Photo: AFP)
This three-day music gig in eastern France is one of the countries biggest rock festivals and has attracted enormous names in the past from David Bowie to Jay-Z. If you're struggling to pronounce the festival's name, it's a cross between Européenes and rock… Eu-rock-éenes. This year has some big names too, like Sting, The Chemical Brothers, Die Antwoord, and Damien Marley. And it's not too pricey, with a day pass costing just €45 and giving you access to the nearby campsite too. More info here.
The Tour de France, July 4th to 26th, (Last year's champion Vincenzo Nibali. Photo: AFP)
The Tour de France is the world's favourite cycling race, and it will take place all over France almost all month. It kicks off on the 4th in the Netherlands, then winds its way across northern France for two weeks, with racers tackling southern France for the second half of the month. This year marks the 102nd edition, and will see competitors race try to reach the finish line at the Champs-Elysées in Paris on July the 26th. Festival Terres du Son (Val de Loire), July 10th to 12th
This central France gig is a relatively young festival, with 2015 marking the tenth edition. A three-day pass costs just over €60, and you can see a bunch of acts from France and abroad, headlined by Fauve. More information here.
Peacock Society Festival, July 10th to 11th (French DJ Laurent Garnier. Photo: AFP)
Over 30 international DJs in two days promises a crazy party for any techno fans in Paris. The event will be held at the Parc Floral, which is inside the Bois de Vincennes in the 12th arrondissement. Keep an eye out for French DJ Laurent Garnier and Dixon, but also Loco Dice, Nina Kraviz, and Talaboman. More information here.
Jazz Festival in Juan Les Pins, July 10th – 19th (British performer Sting at the 2013 festival. Photo: AFP)
This is the longest running jazz festival in Europe, with 2015 marking the 55th edition. The festival kicks off on the 10th in Juan-les-Pins, near Antibes in south eastern France. The area is something of a jazz mecca, and has drawn big names in the past like Louis Armstrong, and more recently international artists like Maurice Chevalier, Mistinguett and Charles Trénet.
There's an extensive line-up this year (find out more here). If you're really into your jazz, there's another festival in Nice this month from the 7th to the 12th of July (click here for more details).
Bastille Day, Paris, July 14th, (Fireworks at the Eiffel Tower on Bastille Day. Photo: AFP)
France's national day, known as Bastille Day, on July 14th is the probably the highlight of the month. Apart from being a public holiday, the day, which commemorates the start of the French revolution, will see celebrations up and down the country but the place to be is almost certainly the Champs Elysées in Paris.
You can join the president of France on the country's most famous avenue for a military parade and flyover. Then in the evening you’ll need to get a good view of the Eiffel Tower to watch the spectacular firework show.
Firemen's ball, July 13th/14th
One of the best and perhaps peculiar Bastille traditions in France is the annual fireman's ball (bal des pompiers) when firefighters open their stations to the public for a good old knees up. They normally take place on July 13th and 14th and unlike Paris nightclubs are open to all ages.
July 20th to August 18th, Paris Plages (Parisians flock to the River Seine during the summer. Photo: AFP)
The annual beach festival returns for its 14th year and promises as always to be bigger and better. This year the French capital beach party takes place between July 20th and August 18th. Most of you will know what's it about but if not, Paris Plages basically sees tonnes of sand deposited on the right bank of the River Seine, where the cars are driven out for the benefit of the bikini/swimming trunks wearing public. Don't forget to try the Bassin de la Villette too, which is an extension of Paris Plage. It's generally quieter and great for kids.
La Villette Open-Air Cinema Festival, July 22nd to August 23rd, It's known as “cinema under the stars” and is now an established fixture in Paris's summer calendar. It takes place at La Villette, in the north east of the city in a big grassy park, which is taken over by families and friends who come with impressive picnics to enjoy a classic film on a giant screen as the sun goes down. This year it runs from July 22nd to August 23rd. And the best thing about it is that it's free, unless you want to pay a few euros for a deck chair. This year's line up includes the thrillers Ghost Writer and Take Shelter. For more information click here.