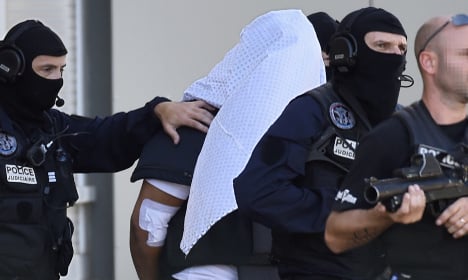 Yassin Salhi, the man who beheaded his boss and tried to blow up a factory. Photo: AFP

A French prosecutor confirmed Tuesday that the man who beheaded his boss and tried to blow up a gas factory in Lyon had a “terrorist motive” and links to the Isis group in Syria.

Yassin Salhi's barbaric attack “corresponded exactly to the orders given by Daesh” (the term used in France for Isis), said Paris chief prosecutor Francois Molins, pointing specifically to the decapitation of his boss Hervé Cornara, 54.

Molins said his attempt to blow up the Air Products gas factory by crashing his car into cylinders “resembled a martyr operation” but that the decapitation of his manager was also motivated by personal hatred.

Giving more details of the barbaric attack at Saint-Quentin Fallavier, near Lyon, Molins said that Salhi, aged 35 and a father of three, left for work that morning armed with a knife and a replica gun.

According to the prosecutor Salhi confessed to “knocking out his employer using a car jack and then strangling him with one hand.”

He then stopped by the roadside and decapitated Cornara in the back of his delivery van with a 25cm blade. The prosecutor said examinations could not confirm whether the victim was dead or alive at the time of the beheading.

“Salhi decapitated his victim, he hung the head on a fence to get maximum publicity, as he told us during interrogation,” said Molins.

The head was attached to the fence with a chain and surrounded by two Islamic flags which Salhi said he had bought the night before the attack.

“This corresponds very precisely to the orders of Daesh (the Islamic State group)” which calls regularly for acts of terrorism on French soil and in particular to cut the throats of unbelievers. “The decapitation recalls the habitual modus operandi of this terrorist organisation,” said Molins.

Reports emerged over the weekend that Salhi took a sick selfie of him holding Cornara's severed head that he sent to Syria via a relay number in Canada.

On Monday, sources close to the case told AFP that Salhi had denied any “religious motivation” for the attack and suggested it was all due to personal reasons citing disputes with both his boss and wife.

But Salhi was in “regular contact” with the French jihadist Sebastian Yunis, 30, known to have left for Syria last November.

During a raid on those close to Yunis, who is from Besancon in eastern France, police uncovered a telephone used to contact him in which he said in a Whatsapp conversation on the day of the attack that he indeed knew Yassin and was “one of the reasons he did that”, referring to the crime.

Yunis said in the message he had asked permission from the Islamic State group to publish the gruesome photos.

Molins said Salhi had spent a year in Syria in 2009 with his wife and children, claiming he was there to learn Arabic.

The prosecutor confirmed that a legal investigation had been opened on Salhi who is accused of murder with a link to a terrorist organisation.