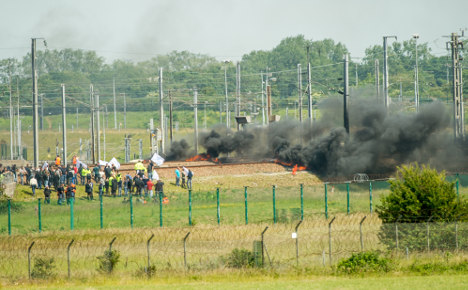 Striking workers from MyFerryLink broke onto train tracks in Calais on Tuesday to block the Channel Tunnel, leading to all Eurotunnel and Eurostar services being cancelled.

The protest is part of their long-running battle to save their jobs and it comes after the striking French sailors blockaded the port of Calais, leading to all ferry services also being cancelled. The dual action has caused huge tail backs on the roads leading to channel ports and and “bedlam” at Eurostar stations in Paris and London for the second time in a week.

It also gave migrants the opportunity to try to break into stationary or slow moving trucks in France in the hope of making it to the UK.

Echoing last week's strike action, the MyFerryLink workers broke onto tracks and set fire to tyres. Reports say they also tried to dismantle some of the rails.

Some people on the scene took to social media to show what appears to be firefighters trying to put out a fire.

The latest from Eurostar was that they would be running a reduced service for the rest of the day.

Eurotunnel, whose shuttle service transports both freight and cars, also had to suspend services and the company was advising passengers to avoid travel if possible.

Later on Tuesday it announced that the passenger service would resume, but delays were expected.

Latest update: Protesters have been removed from the French terminal and we expect to resume a service very soon, more updates to follow ^CM

Our service is resuming for today but we cannot say what the situation will be tomorrow. Please keep checking for updates ^CM

The protests had knock-on effects on both sides of the Channel.

Absolute bedlam again at St Pancras as all #Eurostar trains cancelled for second time in a week. pic.twitter.com/jdYxEwRpJT

Many travellers took to Twitter to share their anger at the disruption to their trip. Others used the chance to comment on France's eagerness to hold strikes.

Thank you strikers at Channel tunnel on the tracks, you ruined my trip to London. Withdraw your labour, I support that, but this? No.

But French workers promised things could get worse and suggested the thousands of British tourists set to head head across this summer are in for a hellish time.

Tuesday's action came after a threat from trade union leaders that they would resort to more extreme measures if they didn't get their way.

“The blockade is in place,” trade unionist Eric Vercoutre of the MyFerryLink works council, told reporters.

“We want to make the French, British and Belgian governments understand that if a solution isn't found to save our 600 jobs, there will be a lot of disruption this summer.

“When the mobilization ramps up, we'll block everything, ” he warned.

The strike was having a huge knock on effect and led to tailbacks on the motorways leading to Calais.

The jams gave the thousands of migrants in the area another chance to try to board trucks heading to the UK.

The UK's foreign office have already warned drivers to lock doors in slow moving traffic with fears that thousands of tourists will be caught up in the mayhem with the summer season just weeks away. A spokesman for Eurotunnel told The Local that French riot police had to be called out as migrants broke through security fences around the terminal.

“We are finding migrants in the terminal and we are asking police to round them up. We are not a police force we are transport service.”

“We are asking French authorities to reinforce their protection of the terminal given the current circumstances ofthe strike and the ongoing migrants crisis.

Earlier on Tuesday passengers booked on ferry services are being advised to try to get on Eurotunnel's shuttle service or to travel to the UK via another Channel port.

Ferry operator P&O said none of its ships would be sailing in or out of Calais.

Calais] Calais Port closed due to Industrial Action out of our control Currently no ships movements in Port.

MyFerryLink was advising customers to check in and then they would be transferred on to the Eurotunnel.

All MyFerryLink services are cancelled until further notice.Please check in as normal if you have a confirmed booking

Negotiations are currently ongoing to try to resolve the dispute but with MyFerryLink set to cease operations on Thursday, port authorities are concerned strike action could continue until Thursday.

A source at the port told The Local: “We are a collateral victim in all this as are the other companies who operate here.”

The dispute centres around Eurotunnel's decision to sell two of the MyFerryLink boats, which were formerly Sea France, to Danish company DFDS after being warned by the UK's competition authority.
Once MyFerryLink ceases operations on Thursday DFDS will take over, but the Danish company has said it will only keep 202 out of 577 workers, reported the Reuters news agency.
Eurotunnel will keep a third MyFerryLink boat running but will only employ around 100 workers, essentially meaning half of the current staff will lose their jobs.

We'll have updates on the situation at Calais throughout the day.