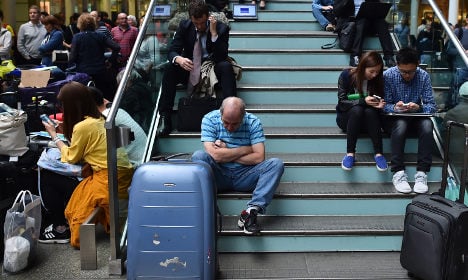 Disgruntled Eurostar passengers forced to wait to get across the Channel. Photo: AFP
Striking workers from MyFerryLink broke onto train tracks in Calais on Tuesday to block the Channel Tunnel, leading to all Eurotunnel and Eurostar services being cancelled.
And understandably, passengers weren't pleased. Many saw the holidays put on hold or trips cancelled and others were forced to turn back home after getting stuck in the Channel Tunnel.
With the strike action being the second in a matter of days to cause to cause absolute travel chaos on both sides of the Channel, it has prompted much anger and only helped to reinforce some clichés about the French.
Here's a selection of some of the views expressed on Twitter by those caught up in the chaos. (Strong language in some tweets).

#eurostar OK have to ask…”what the hell is wrong with the French?” Answers on a postcard please cos it's the only way it will get here!

Thank you strikers at Channel tunnel on the tracks, you ruined my trip to London. Withdraw your labour, I support that, but this? No.

RT MojganAhmad: It is one thing to #protest and another to damage infrastructure http://t.co/vrfCVs5TB4  #Eurostar

Holiday over .. Got stuck in euro tunnel for 2 hours because French set the rails on fire… Melted

The lazy French are at it again…. https://t.co/PaLrLj1wdw

Ah, the French and their strikes… #eurostar is stopped once a week nowadays?!

The French certainly know how to do a strike #eurostar

@TheLocalFrance it's unfair that a few can bring the rest of us to a stand still. One reader of The Local suggested the strike was the straw that broke the camel's back and he'd decided to quit the country.

“I've had about all I can take of this backward country and it's race to the bottom. Crap like this belongs in the 70's.

“My wife and applied for a transfer to Canada today,” said the commenter.

Some disgruntled passengers The Local spoke to at Gare du Nord on Tuesday respected their right to strike, but think the French take things too far.

“I'm outraged at the workers. Of course they have a right to strike… But to set fire to something on the tracks is dangerous and irresponsible,” a Briton named Nick told The Local.

“I'm outraged at the workers. To set fire to something on the tracks is dangerous and irresponsible,” says Nick. pic.twitter.com/YmjdkTOcnC

He said people in the UK had mixed opinions about the French propensity to strike.

“There's an underlying respect in some ways. Some people see it as a good thing that the French don't just lie down and take it, but the general impression is that there's too much.”

“Today's disruption was potentially dangerous and it's become quite frustrating for the rest of us.”

Haakon from Norway says they also strike back home, “but never like this”.

“People never burn tyres in Norway. That's crazy. At worst, they may be don't work for a day or two, but there's never anything like this.”

“They're going about it the wrong way,” said his friend.

One frustrated Eurostar passenger from Chicago told The Local: “This is not the most effective way to hold a strike. I support protesting but not when it's violent,” a younger man in the group said.

“They're hurting us.. the tourists. This would never happen in the states.” “When the mobilization ramps up, we'll block everything”

But there may well be plenty more anger directed at the French this summer with MyFerryLink workers promising more action until  they get what they want.

“We want to make the French, British and Belgian governments understand that if a solution isn't found to save our 600 jobs, there will be a lot of disruption this summer,” trade unionist Eric Vercoutre of the MyFerryLink works council, told reporters.

“When the mobilization ramps up, we'll block everything, ” he warned.

The dispute centres around Eurotunnel's decision to sell two of the MyFerryLink boats, which were formerly Sea France, to Danish company DFDS after being warned by the UK's competition authority.

Once MyFerryLink ceases operations on Thursday DFDS will take over, but the Danish company has said it will only keep 202 out of 577 workers, reported the Reuters news agency.
Eurotunnel will keep a third MyFerryLink boat running but will only employ around 100 workers, essentially meaning half of the current staff will lose their jobs.

But while many passengers are frustrated some say the French should be commended for fighting their corner.

In a blog for The Local Gilles Garnier, member of the French Communist Party’s National Executive Committee, tells The Local that strikes are for Garnier an expression of a healthy democracy. If people lost their leverage against the government and business leaders it would signal a disturbing shift, in his view.

“It’s totally normal in a democratic society that strikes are allowed. Strikes are only forbidden in fascist regimes or dictatorships,” he said, adding that the industrial action in France now is nothing like it used to be.”

Why the French are right to strike