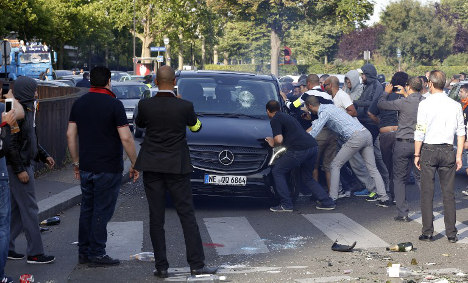 Cab drivers get violent on Thursday's protests. Photo: AFP
It seems that Thursday's violent protests by cabbies in Paris has achieved some result for frustrated cabbies.
Interior Minister Bernard Cazeneuve announced on Monday that 200 extra officers would patrol the streets looking for UberPop drivers.
The specialist taxi police brigade, known as “Boers” will be specifically tasked with finding and apprehending anyone transporting paying customers without a licence, and UberPop drivers risk having their vehicles seized. The moves comes as part of a bid to restore calm to the streets of the capital, which last week saw violent scenes from cabbies who were irate about being undercut by the likes of UberPop – an app which brings customers together with ordinary drivers, but which was officially banned in France in January.
They were also protesting against private minicabs, known in France as VTCs, whom they claim provide “unfair competition”.
President Hollande described the demonstrations, in which US rocker Courtney Love was caught up in, as “unacceptable violence in a democracy, in a country like France”, adding that “UberPop should be dissolved and declared illegal.”
The legal waters regarding VTCs remain muddy in France.
While UberPop has been officially made illegal it continues to operate until a ruling by France's constitutional court in September.
Certain regions are not waiting and have imposed the ban, the latest of which is Paris.
However, UberPop continues to grow in popularity (400, 000 users and rising), much to the frustration of taxi drivers who say their earnings have plummeted.