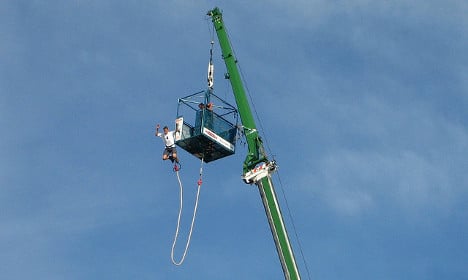 The woman, not pictured, died after a 65-metre drop. Photo: Jeremy Keith/Flickr

The woman died on Sunday after a jump in the town of Audincthun, northern France.

Her partner is believed to be in a serious condition in Lille hospital after the tandem jump went horribly wrong.

“The couple went to the top of crane, 65 metres high, to do a bungee jump,” a source close to the investigation told Le Parisien newspaper.

“During the jump, around 15 metres from the ground, there was a dysfunction with the harness and both fell heavily to the ground,” said the source who added that the elastic had not broken.

The woman was confirmed dead at around 6pm, while her partner was rushed to hospital where the extent of his injuries is not known.

Police have opened an investigation and the equipment used in the jump has been seized by investigators.

Local prosecutor Sébastien Piève confirmed that the boss of the firm that organises the jumps and the employee that was in charge of attaching the couple to the bungee rope have been arrested on suspicion of manslaughter.

“Clearly there was a problem with the harness,” he said.

“We will see if it was caused by human error, or a problem with the equipment or a combination of the two,” he said.