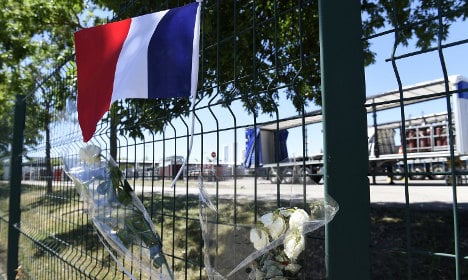 A French flag and flowers are placed on the fence of the Air Products gas factory where the head of the decapitated man was found last week. Photo: AFP
The man believed to have beheaded his boss in France has denied any religious motivation, investigative sources said Monday, muddying efforts to pin down the reasons for an attack which bore the hallmarks of a jihadist act.
Yassin Salhi, 35, on Sunday confessed to decapitating his employer and pinning his severed head to the fence of a gas factory in eastern France in a macabre display that included two Islamic flags.
However according to a source close to the investigation, Salhi, who was known to security services for radicalisation, “denies any religious motivation to his act”.
“He hasn't explained” why he attached the head to the fence, or shouted out “Allahu Akbar”(God is greatest) as firefighters overpowered him as he attempted to open bottles of acetone in a warehouse at the factory, said the source on condition of anonymity.
Salhi drove his delivery van into the Air Products warehouse on Friday, causing an explosion and alerting firefighters who made the grisly discovery of the decapitated corpse of 54-year-old Herve Cornara. (Police officers cordon off the area around the body. Photo: AFP)
Investigative sources told AFP that a fellow employee had reported a quarrel between Salhi and Cornara two days before the murder, after the employee dropped a crate containing expensive goods.
While the attacker apparently denies any Islamist motivation, police discovered he had sent a gruesome selfie with the severed head to a number in Canada believed to belong to a French jihadist thought to be in Syria.
The jihadist, named Yunes-Sebastien, belonged to the same radical movement from the eastern Franche-Comte region as Salhi, said sources close to the case.
French Interior Minister Bernard Cazeneuve said Salhi had been on a national security watchlist from 2006 to 2008 and later raised red flags for his links to radical movements between 2001 and 2014.
– Syria links probed –
Salhi's mother and sister, who were questioned by police and later released, said Salhi had been to Syria in 2009, before conflict broke out in that country or the Islamic State group began seizing territory.
But this is “declarative” and police have no evidence to back up the statement, said the source.
Police took Salhi, dressed in a hospital gown and wearing a bulletproof vest, with his head covered by a white cloth, to his apartment on Sunday in an effort to find his passport and verify this information, to no avail, investigative sources said. (The attack took place near Lyon, in eastern France. Photo: GoogleMaps)
Hundreds of French citizens have left for Iraq or Syria to wage jihad and Prime Minister Manuel Valls said Sunday that 1,800 people in France were “linked” in some way to the Islamist cause.
Salhi, a married father-of-three, has been in police custody for some 72 hours, and can be held for 96 hours without charge.
The gruesome beheading shocked France which has been on high alert since 17 people were killed in three days of Islamist attacks in January, beginning with a shootout at the satirical magazine Charlie Hebdo.
Valls told French television on Sunday that the world was engaged in a “war against terrorism”.
“We cannot lose this war because it's fundamentally a war of civilisation. It's our society, our civilisation that we are defending,” Valls told iTele rolling news channel.