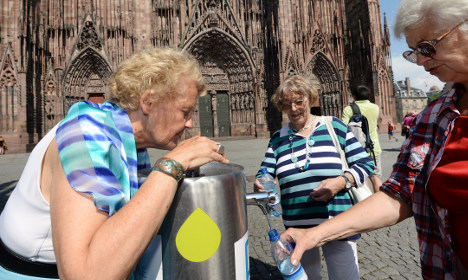 France is seeking to avoid a repeat of 2003, when a heatwave killed 15,000 mostly elderly people. Photo: AFP
Météo France, the country's meteorological service, issued Orange alert warnings for much of France on Monday with temperatures set to soar in the coming days.
A heatwave is forecast to hit the country on Tuesday, with weather agency Météo France predicting it will first bake the south then move northwards throughout the week.

The agency noted that the “intense” heatwave will be the strongest since the summer of 2006, with temperatures close to the record highs for the June-July period.
Late on Monday afternoon, the agency took the step of issued an “orange alert” for 26 départements in central France (see map below).
That's the second highest warning level and asks the public to be “very vigilant”. The départements on alert are all central: Lot-et-Garonne, Lot, Dordogne, Corrèze, Haute-Vienne, Creuse, Puy-de-Dôme, Indre, Cher, Allier, Loire, Rhône, Ain, Saône-et-Loire, Nièvre, Loiret, Yonne, Côte-d'Or, Seine-et-Marne, Essonne, les Yvelines, Val-d'Oise, Hauts-de-Seine, Seine-Saint-Denis, Val-de-Marne and Paris
This kind of heatwave has not been recorded at this time of year for more than 60 years, according to Météo France.
It tipped that temperatures will hit around 40C in the south west of France, with up to 35C in Paris.

Forecasters warned that temperatures are unlikely to drop below 20C at night. (A Parisian cools off in the summer sun. Photo: AFP)
Storms in the north west on Thursday are predicted to cool down the western half of the country, but the temperatures will rise again on Friday and stay high over the weekend.
The Ecology Minister Ségolène Royal took to Twitter to remind everyone how to stay safe during the heatwave, advising her followers to drink plenty of water, and to ensure the head, body, and even the clothes are kept cool and hydrated.

SEE ALSO: How to keep cool in this week's heatwave (There's a common theme when it comes to France's weather this week…)
If you're really looking to avoid the heat, head to Brittany in the northwest, where temperatures will remain around 25C, or the Riviera, where the sea breezes will keep temperatures to a “cool” 30C.
Pascal Scaviner a forecaster at Metéo Consult says despite the rising temperatures, this week's heatwave does not necessarilty mean France is in for a long hot summer.
“This episode has no influence on the future. At the moment forecasts suggest we are in for a “standard summer”.
The map below shows estimated temperatures for Tuesday and weather maps for the following three days tell a familiar tale. On Saturday (see map below) storms should bring cooler air to the north west and northern France at least. After 15,000 mostly elderly people died in a heatwave back in August 2003, the government launched an emergency response programme in which authorities can raise a three-tiered alarm system to ensure there won't be a repeat. People are advised to drink water regularly, even when not thirsty, in order to remain hydrated. It is also wise to avoid any physical exertion and try to cool down as often as possible by taking cold showers.
The general advice is to keep the air conditioning on during the day and get the windows open at night.