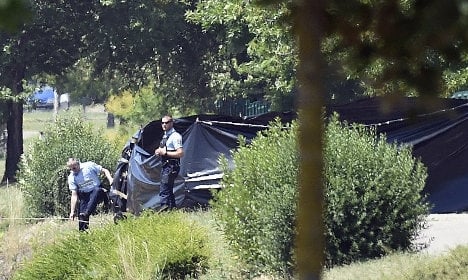 Police at the scene of the attack on Friday. Photo: AFP

Yassin Salhi, 35, “has also given details about the circumstances” surrounding the killing, according to investigation sources, who said he would be transferred to Paris for further questioning later Sunday.

Salhi's confession came after it emerged the married father-of-three sent a gruesome selfie photo of himself and the severed head to a WhatsApp number in Canada.

Investigators have warned however that it could be a relay number and the intended recipient could be anywhere in the world.

The grisly killing came on the same day as two other attacks claimed by the Islamic State jihadist group, which left 38 people dead at a beach resort in Tunisia and 27 in a suicide bombing in Kuwait.

The victim, a 54-year-old local businessman named Hervé Cornara (see photo below), was found with Arabic inscriptions scrawled on him and Islamic flags were also found on the site at the small town of Saint-Quentin-Fallavier, some 40 kilometres (25 miles) from Lyon.

His head was “hung onto the fence surrounded by two Islamic flags bearing the Shahada, the profession of (the Muslim) faith,” said French prosecutor Francois Molins.

This is the first time someone in France has been found beheaded by a suspected Islamist, a method of killing that has become a trademark of the Islamic State group in Iraq and Syria.

It also came nearly six months after the Islamist attacks in and around Paris that left 17 people dead, starting with a shooting at satirical magazine Charlie Hebdo.