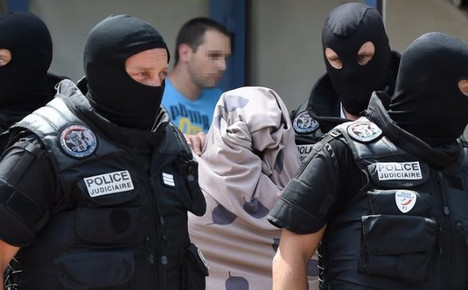 Anti-terror police lead a person away from the home of terror suspect Yassin Salhi. Photo: AFP
France was shaken on Friday by a terror attack that saw one man decapitated and several injured.
Details about the suspect continue to emerge as he sits in police custody, arrested after driving a vehicle into a gas factory in Isere and causing an explosion.
The attacker has been named by the Interior Minister as Yassin Salhi (spelling unconfirmed), a 35-year-old man from Saint-Priest, the fourth biggest suburb of Lyon.
It appears the French-born terrorist managed to keep his shocking plans hidden, with his wife revealing on Friday afternoon that she had no idea about the crimes he had committed.
She told French channel Europe 1 that her husband was a delivery driver who went to work as normal at 7am on Friday morning, but didn't return home in the early afternoon as expected.
She said that it felt as if her “her heart was going to stop” when she learned that he was the suspect. She added that hers was a “normal Muslim family” living a “normal family life”.

Her husband, however, had clearly planned the attack. He was carrying two flags which featured the banners of Middle East terror group Isis, and is understood to have scrawled Arabic messages on the head of his victim.
After the name of the killer emerged on Friday afternoon, neighbours spoke to French TV of an ordinary man, many saying that he was a typical member of the community who liked to play football with his children.
Later on Friday unconfirmed reports said that the man Salhi beheaded was his boss. (Photo: AFP)
Later the French PM Manuel Valls confirmed what most suspected from the very beginning, that the attack was motivated by Islamist extremism.
It remains unclear if Salhi acted alone, or indeed if he had an accomplice with him in the car at the time of the attack.
Interior Minister Bernard Cazeneuve confirmed that authorities opened a “fiche S” file on the man in 2006 for radicalisation. A “fiche S” for which the S stands for “Sûreté d'etat” means he had been identified as a possible danger and should be watched.
France's “fiche S” files have a lifespan of two years, meaning authorities renew them if they consider the person in question to be still dangerous.
While having one of the files doesn't warrant an arrest, it means certain individuals can be put under extra surveillance, reported French channel BFM TV.
In the case of Salhi, the file was not renewed after two years, suggesting he was no longer considered a risk.
The reason he was put on a police watch list was because he attended a “very radical” mosque in 2006 in Lyon, the International Observatory of terrorism told France 24.
The terrorist, who was born in Pontarlier in eastern France, had no criminal record. (Photo: AFP)
Cazeneuve has said that the man had a “link” to Salafist movement, but was not implicated directly in any terrorist activities. The Salafi movement is a group within Sunni Islam, which is often associated with literalist approaches to Islam.
Commentators have noted that the man fits a similar profile to others who have been involved in or attempted terrorist attacks in France – a young man, known for links to extremism but not considered a high enough risk to place under direct surveillance.
Cherif Kouachi, one of the pair behind the Charlie Hebdo attack, was also known to terrorist police but not followed, as was Amedy Coulibaly, who was behind the deadly shooting at the Jewish Kosher store in Paris.
Authorities have said that Salhi has so far refused to speak whilst being questioned by police. A number of people linked to him have been taken into custody, as police continue to hunt for potential accomplices.
READ LIVE DEVELOPMENTS ON THE LOCAL'S BLOG HERE