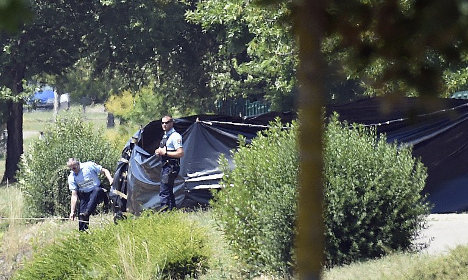 Police cordon off the area where the body was found. Photo: AFP
Details have been hazy about the one fatality in Friday's terror attack, but by late afternoon, the shocking picture became clearer.
The man who was killed was a local businessman and the boss of his killer, Yassin Salhi, a 35-year-old father-of-three with links to Islamic extremism.
The two worked as delivery drivers for a company which is as yet unnamed, but which had clearance to pass the strict security barriers at the factory in Saint-Quentin-Fallavier, Isere. It remains unclear if the killer had something personally against the victim, or if he perhaps was just using him to get access to the factory.
CCTV footage later revealed that the murder occurred inside the van, before the killer pinned the head of his boss to the fence and then dumped his body beside two Islamist flags.
The full picture may still be a long time coming, with authorities reporting that the terrorist is yet answer any questions about his actions.
More to follow