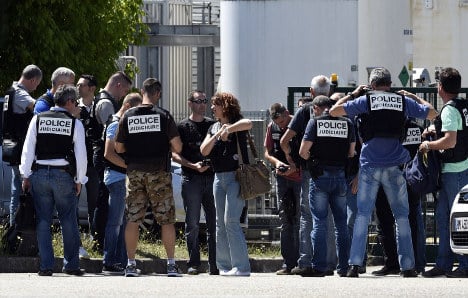 Police were on the scene soon after the attack took place. Photo: AFP
The grisly attack near France's second city of Lyon came on an especially bloody day worldwide, with at least 27 gunned down at a beach resort in Tunisia and 13 killed in a suicide bombing in Kuwait claimed by Islamic State extremists.
“The intent was without doubt to cause an explosion. It was a terrorist attack,” said Francois Hollande in Brussels, cutting short an EU summit to chair emergency meetings in the French capital.
Hollande said a vehicle driven at high speed by “one person, maybe accompanied by another” smashed into the factory, about 40 kilometres (25 miles) from Lyon.
“At the time I am speaking, there is one dead and two injured,” said a grim-faced Hollande, calling for “solidarity” for the victim, who was found with Arabic inscriptions on him.
The bloody discovery of the decapitated head is thought to be the first instance in France of a beheading during an attack — which has become a trademark of the Islamic State group in Iraq and Syria.
And the gruesome killing came nearly six months after the Islamist attacks in and around Paris that left 17 people dead and started with a shooting at satirical magazine Charlie Hebdo. – 'Lone wolf' attacks –
The 35-year-old attacker, identified as Yassin Salhi, had been known to security services for a number of years but did not have a criminal record, Interior Minister Bernard Cazeneuve said.
The minister said a local firefighter who rushed to the scene of the attack had overpowered the suspect, praising him for his “courage and … cool head”.
Salhi and his wife have been taken into custody and an anti-terrorist probe has been launched, Cazeneuve said.
At least one other person is also being questioned as part of the investigation but there is no formal link with the attack, said sources close to the probe.
The victim, who ran a delivery company, was Salhi's boss.
A woman identified as Salhi's wife told French radio: “On the news they are saying that it's a terrorist attack, but that's impossible. I know him, he's my husband. We have a normal family life.”
For months, Europe has been on high-alert for so-called “lone wolf” attacks that are very difficult to prevent after Islamic State fighters urged supporters to carry out assaults wherever they could.
“There was a decapitated body with inscriptions,” said Hollande, although sources close to the enquiry said it was not clear whether the victim was transported to the site or whether the beheading was carried out at the factory.
“A flag with Arabic writing on it was found at the scene,” said Cazeneuve, adding that the text was being translated.
The suspect entered the factory owned by American group Air Products and set off several small explosive devices, sources close to the investigation said, with at least two people hurt in the assault.
Police said it was unclear whether the attacker was acting alone, or had accomplices.
Security services drew up a file on the suspect in 2006 for radicalisation, but he had no criminal record, said Cazeneuve, who went immediately to the scene.
He had a “link” to the Salafist movement, an extreme form of Sunni Islam, Cazeneuve added, stressing that the investigation was in its early stages.
The attack, which occurred around 10:00 am local time (0800 GMT) in the town of Saint-Quentin-Fallavier, shocked local residents.
“This is a small town and a large industrial zone. There's never been any concern in the region. We're all surprised. We're really in shock this morning,” an employee at a nearby business told rolling news channel BMFTV.
The victim was later identified as a businessman from the suburbs of Lyon. – 'March against terrorism' –
Prime Minister Manuel Valls, who is on an official trip in South America, ordered security measures stepped up at all sensitive sites in the area.
“Islamist terrorism has hit France again,” Valls told reporters in Bogota.
France has been on high alert since January 7 when two Islamist brothers attacked Charlie Hebdo, killing 12. A policewoman and four hostages in a Jewish supermarket were also killed during the three-day attacks.
The January attacks drew record crowds onto the streets of Paris in a historic “march against terrorism”.
Nearly four million people marched through the streets of France and more than 1.5 million in the French capital along with dozens of world leaders to express defiance in the wake of the attacks.
World leaders began reacting to the news only a few hours after the attack, with Spanish Prime Minister Mariano Rajoy saying that “barbarism will always be confronted by unity among democrats.”
German Foreign Minister Frank-Walter Steinmeier said his country stands united with France against “terror's blind hate” and in defence of “free society”.
France has a high proportion of people that have gone to fight alongside Islamists in Iraq and Syria and has the biggest Muslim population in Europe.
Earlier this week, the country passed a controversial new spying law granting sweeping powers to snoop on citizens.