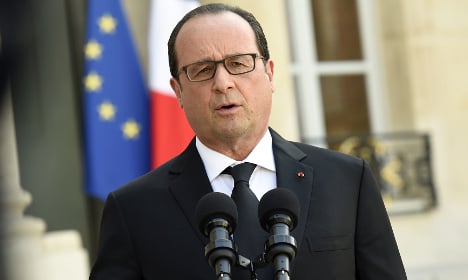 François Hollande was again forced to call for unity and vowed to fight terrorism after Friday's attack. Photo: AFP

France was left feeling decidedly uneasy again on Friday after a 35-year-old delivery driver named Yassin Salhi, a radical Islamist, decapitated his boss and attempted to carry out an apparent suicide attack on a gas factory near Lyon.

“The intent was without doubt to cause an explosion. It was a terrorist attack,” said Francois Hollande in Brussels, cutting short an EU summit to chair emergency meetings in the French capital.

The decapitation is thought to be the first instance in France of a beheading during an attack — which has become a trademark of the Islamic State group in Iraq and Syria.

While the gruesome nature of the attack  – which saw the decapitated head covered in Arabic inscriptions placed on a fence at the factory next to two Isis flags – has left France shocked, it has simply confirmed what many had feared.

Ever since gunmen burst into the offices Charlie Hebdo on January 7th, followed by a shooting at a Jewish store two days later, more attacks have felt inevitable. “I think what has happened was unfortunately something we were expecting. We knew there would be more attacks,” Jean-Charles Brisard, chairman at the Paris-based Centre for Analysis of Terrorism, told The Local.

“We know that France is a target of these jihadist groups, they repeatedly say so in their own propaganda, as well as in the videos recorded by French jihadists who are fighting for Islamic State.

Since the January terror attacks, French authorities have said they have thwarted numerous other attacks, including one on a church near Paris in April, when a man armed with Kalashnikov rifles was apparently planning to open fire on the congregation.

The suspect that day was 24-year-old IT student Sid Ahmed Ghlam, who like Yassin Salhi had come on the radar of anti-terror police for his links to extremism, but was not considered a high enough risk to be placed under close surveillance.

Both terror experts and the French government agree that it’s nigh on impossible to put all suspects under close surveillance and therefore prevent attacks.

“We know we are a target in France, it's probable that France will be targeted again,” said Brisard. In the meantime all France can do is maintain high security around sensitive sites, which up to now has meant religious buildings and transport hubs, but will now include facilities like oil, gas and nuclear plants.

The president announced that France’s anti-terrorism alert the “Plan Vigipirate” will be raised to its highest level in the Rhône Alps region, where Friday’s attack took place.

But with 10,000 soldiers and armed police already patrolling sensitive sites around the country France’s security forces are already stretched to the limit.

The emphasis has turned to trying to identify potential attackers before they strike and Friday’s factory attack comes just a day after French MPs gave the green light to a law that will give intelligence services sweeping new surveillance powers.

Authorities have also announced their intention to hire legions of hackers and spies to keep tabs on social media networks and radical Islamist websites. “This attack shows the threat of jihadists is still extremely high,” said PM Manuel Valls. “It weighs heavy on our country”.

The government also fears that French society, which has seen a rise in Islamophobic and anti-Semitic attacks in recent months, will be fractured again by the latest attack.

The president, prime minister and several ministers all spoke on Friday of the need for the kind of unity that saw hundreds of thousands march through the streets of French cities in the days after the January attacks.

“We must not cede to fear,” said Hollande.