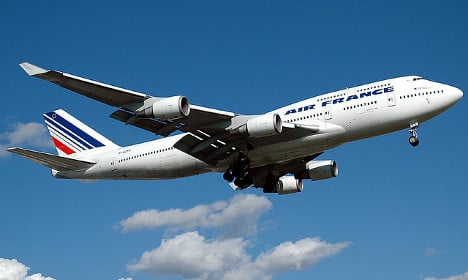 There will be no sweeping job cuts, says Air France. Photo: Doug/Flickr
An email sent by the company said Air France “formally denies information published in the press” Friday, when the Le Monde daily reported the airline as preparing “3,000 ground crew departures and 300 among pilots.”
“These job cuts will be accompanied by the withdrawal of 20 planes from the Air France fleet, and additional route closures,” the paper said.
The report came amid measures Air France is taking to return to profit after posting an operating loss of 417 million euros ($467 million) in the first quarter of the year, and a 198 million loss in 2014.
As part of a multi-year cost-cutting programme seeking around 650 million euros in savings, Air France presented a series of cuts earlier this month that included halting service on unprofitable routes and reducing the frequency of certain long-haul flights.
Air France chairman Frederic Gagey said at the time that after consultations with unions this autumn, the airline will “review the company's financial situation, the progress of negotiations, and number of people participating in two(voluntary departure plans) under way.
“At that time we'll be able to determine actions necessary for the future of Air France,” Gagey said.
Fears of additional layoffs are high despite an Air France restructuring plan carried out over the last three years that cut 8,000 jobs — or 10 percent of the workforce — from the company.