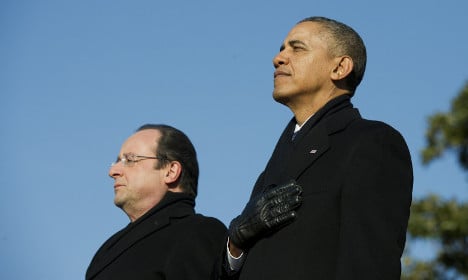 French President Francois Hollande and US President Barack Obama. Photo: AFP
The latest figures from Tuesday's Pew Research Center report show more than half of the French (52 percent) said they believe the United States government respects the personal freedoms of its people.
Across the 39 nations surveyed, six of which were in Europe, a median of 63 percent believed the same while with 22 percent disagreed.
While the French result was already lower than average, it could sink even lower in the wake of a spying scandal that shook the nation this week, after it was revealed that the US has been spying on the last three French presidents through its controversial NSA programme.
The revelations could also hurt France's positive view towards the US, with 73 percent of the nation favourable and 27 percent not.
This ranks France as the among the most positive of the European countries that were quizzed, and streets ahead of Germany, where only 50 percent were favourable. Italy, meanwhile, had an 83 percent approval rating.

“The US receives largely positive reviews among many of its key Nato allies. About two-in-three Canadians have a favorable opinion, as do large majorities in Italy, Poland, France, the UK and Spain,” the report stated, noting that Germany was an outlier.

READ ALSO: Ten Transatlantic scraps between US and France French support for the United States has soared since the period between 2003 and 2008, when it hovered around the 40 percent mark.

That slump coincided with George Bush's second term as president.

While it's dropped two percentage points since last year's poll, the 73 percent is close to the highest it has ever been (75 percent in 2014 and 2009).

Indeed, support has generally been high since Barack Obama first took power in 2009.

But widely condemned “enhanced interrogation” methods – which many consider to be torture – used by the US on terror suspects following the September 11th 2001 terrorist attacks did not sit well with most French respondents. Fifty-eight percent in France said these methods were not justified while 40 percent said they were.

Americans, on the other hand, mostly supported such methods with nearly 60 percent agreeing that the interrogation techniques were justified and 37 percent opposing them.