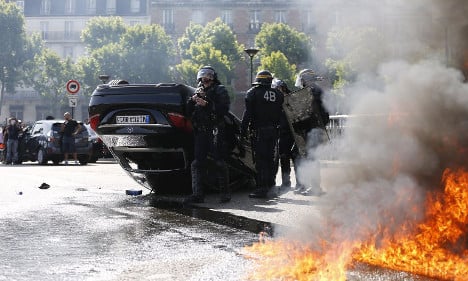 As taxi drivers vented their anger by burning cars and bringing cities to a standstill France's interior minister Bernard Cazeneuve ordered the Paris police to implement a ban on UberPop in the capital.

“I have given instructions, considering the grave problems with public order and the development of this illegal activity, to the police prefecture in Paris to ban UberPop activities,” said Cazeneuve.

The city's police department later took out a decree banning the controversial smartphone app that puts customers in touch with private drivers at prices lower than those of traditional taxis.

Cazeneuve also pointed out that Uber could be guilty of the crime of “illicit transportation of people” under article 40 of the penal code, that could be punished by two years in prison and a €300,000. In another move aimed at calming the protests union leaders were invited to the Prime Minister's office at Matignon, but given PM Manuel Valls was out of the country the offer was turned down and calls went out to continue the protests.

Cabbies are angry that UberPOP has been allowed to continue in France despite being banned since January. But their frustrations spilled over and resulted in a number of ugly incidents around the country.

In Paris rock star Courtney love's car was attacked as it left Charles de Gaulle airport leaving her to rebuke President François Hollande demanding ” where are the f**king police.

One private chauffeur, who said he did not work for Uber “or any other app” was dragged from his van by angry cabbies when he reached a blockade in the west of Paris. They slashed his tyres, smashed a window and then set it on fire.

“Why did you come to work, you know we're on strike today,” shouted one cabbie, while AFP journalists saw another car on fire further down the road.

Access to three terminals at Paris's Charles de Gaulle airport in the north was blocked and cabs were converging on the Orly airport in the south and at train stations inside the city.

There were reports of passengers having to walk along the motorway to the airport.

Paris based Hamish Millar, who passed through Charles de Gaulle airport about to set off on holiday, said there were giant queues on the RER train services as people flocked to avoid the roads.

“It's absolute chaos here at the airport, I've never seen anything like it,” he told The Local.
He added that protesting cabbies were literally pulling any other cab drivers out of their vehicles, while shouting abuse and spitting on their cars.
“They're even yelling at the media – this does nothing for their already terrible reputation.”
A policeman told Millar that him that officers were holding back from intervening too much, fearing the situation could escalate.
“People around are in sheer disbelief. And tourists arriving are shocked – this is Paris they're arriving in, not a warzone! This is proper mafia stuff here.”
Tensions were high at the various protests and there were reports of UberPop drivers and private hire cabs, known as VTC's, being attacked. One driver told iTele that a brick was thrown through his window as he transported a mother and her baby.

There was also tension at Orly airport where a VTC driver reportedly ran over a taxi driver.

Taxi drivers in Paris also blocked access to Gare du Nord rail station. At one point taxi drivers pelted the car of one of their colleagues who was refusing to join the protest. The driver's customers had to be led away from the scene.

One eye-witness told The Local: “I'm a Parisian and this is why I never take taxis. They're all crazy. They think they have a Monopoly. VTC drivers provide a good service but taxi drivers want the monopoly.”

Abdelkader Morghad, from the National Federation of Independent Taxi drivers told The Local on Thursday that the rules of the game were not fair.

“UberPop is completely illegal in France, but people are still able to download the app and drivers are still able to pick them up and earn money. How can you explain that? That’s the real frustration for us.”

SEE ALSO: Why French public should support their their taxi drivers

This tweet below claims to show an Uber car that was turned upside down by taxi drivers, although it cannot be verified.

There were reports of blockades on roads around the cities of Lille, Bordeaux, Nice and Lyon. The image in the pic below shows a passenger having to walk past burning tyres to get to Nice airport. This week The Local reported how one UberPop client says he was beaten up by taxi drivers in Lyon. On at least two occasions in Strasbourg last week, taxi drivers posed as customers in order to lure Uber drivers to isolated spots where they were assaulted by other cab drivers and their vehicles damaged.

US-based Uber, which offers several types ride-sharing services, claims to have 400,000 UberPOP users in France. However, the drivers do not pay taxes, do not undergo the 250 hours of training that is mandatory for cabbies and do not carry the same insurance as taxis.