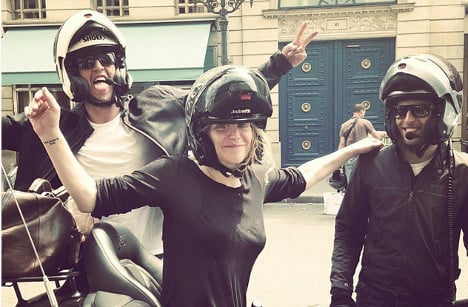 Tourists and rocker Courtney Love were some of those affected by taxi driver protests on Thursday. Photo: Instagram

Travellers including rocker Courtney Love, 50, were caught up in ugly scenes around Paris airports on Thursday as taxi driver protests against Uber turned violent.

Love told off the French president in a tweet on Thursday after she got caught in the violent anti-Uber taxi protests sweeping the country.

they've ambushed our car and are holding our driver hostage. they're beating the cars with metal bats. this is France?? I'm safer in Baghdad

Love wrote on Twitter that protesters were whacking vehicles with metal bats and “ambushed our car and are holding our driver hostage,” adding “I'm safer in Baghdad.”

“Francois Hollande where are the fucking police??? is it legal for your people to attack visitors? Get your ass to the airport. Wtf???” she wrote in a comment that was retweeted nearly 4,000 times on Thursday afternoon.

Kurt Cobain's widow also sent out a photo of her car, which shows egg splattered on the vehicle's exterior by protesters.

“Paid some guys on motorcycles to sneak us out, got chased by a mob of taxi drivers who threw rocks, passed two police and they did nothing,” Love wrote in a later tweet.

Dude @kanyewest we may turn back to the airport and hide out with u.picketers just attacked our car #ParisUberStrike pic.twitter.com/MtanurybOO

@Courtney wish you're safe. I'm a french citizen and shame on my country. Hollande is a joke. Sadly

She shared the picture below on her Instagram account, writing that it was “thanks to these guys” that she got out.
“I'm scared out of my wits. Mr. François Hollande president or libertine? I can't believe this really just happened. Love French people but your government blows,” she wrote.
SEE ALSO: Why the French public should support their taxi drivers
Elsewhere, taxi drivers burned cars and blocked access to airports and train stations, leaving many passengers forced to walk along the roads to reach their destinations.

Some 2,800 cabbies took part in the strike, with more than 30 blockades nationwide, including the access points to Paris's Charles De Gaulle and Orly airports, police sources said.

Hamish Millar, who was at Charles de Gaulle airport about to set off on holiday, said there were giant queues on the RER train services as people flocked to avoid the roads.
“It's absolute chaos here at the airport, I've never seen anything like it,” he told The Local.
He added that protesting cabbies were literally pulling any other cab drivers out of their vehicles, while shouting abuse and spitting on their cars.
A policeman told Millar that him that officers were holding back from intervening too much, fearing the situation could escalate.
“People around are in sheer disbelief. And tourists arriving are shocked – this is Paris they're arriving in, not a warzone! This is proper mafia stuff here.”
Tensions were particularly high at Charles de Gaulle airport in Paris, where there reports of a taxi driver being knocked over and Uber drivers being “hunted” by cabbies.
The protests meant obvious knock on effects for tourists.

More than 1000 people currently stuck inside the Terminal at #Roissy #CDG pic.twitter.com/Zf9lju32U3