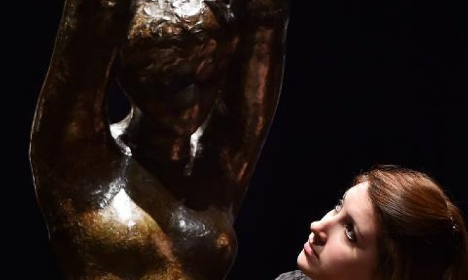 The previously uncast Rodin sculpture. Photo: AFP
The sculpture of “Aphrodite”, moulds of which were until recently thought lost, was created by Rodin in 1913 for a play of the same name in Paris — but at the time it was cast only in plaster for its appearance on stage.
“Conceived in 1913 for a play, this sculpture was never cast as the moulds containing the upper part of the arms were only found very recently,” said Pierre Martin-Vivier of the Christie's auction house in a statement.
Only in 2014, during research into Rodin's donations to the French state, did the museum housing the artist's work uncover the complete mould, allowing it to be cast in bronze.
The 2.15 metre piece, which shows the nude goddess of love with her arms elegantly stretched above her head, fetched $1,148,053 (1.02 million euros) in London late on Tuesday.
The sculpture by Rodin, better known for works such as “The Kiss” and “The Thinker”, is a much larger version of an older image of Aphrodite which featured in Rodin's monumental “Gates of Hell”.
“Animated by a gentle swing provoked by the weight of her own body, Aphrodite cannot properly be called a standing nude, rather the figure seems
to be suspended, her feet only touching the earth lightly,” said the auction house of the piece.
“The sculpture is an example of the unconventional charge with which Auguste Rodin was able to invest the classical tradition of sculpture.”
The lot was sold as part of the auction house's Impressionist and Modern Art sale, which also saw pieces by Pablo Picasso, Rene Magritte, Paul Cezanne and Marc Chagall go under the hammer.
The evening's top seller was Iris Mauves by French impressionist Claude Monet, which went for $17,216,021.