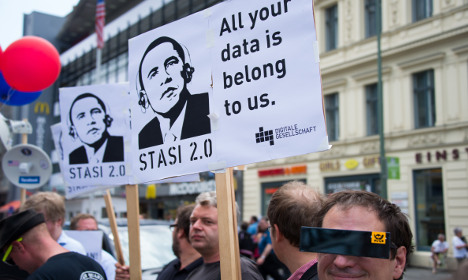 Anti-spying protesters take to the streets against the NSA program. Photo: AFP

Here are some key points revealed by the documents, which can be found at https://wikileaks.org/nsa-france/.

A note dated May 22, 2012 and classified as “Top Secret” shows that French president Francois Hollande had “approved holding secret meetings in Paris to discuss the eurozone crisis, particularly the consequences of a Greek exit from the eurozone”.

Hollande also arranged in a meeting with then-French prime minister Jean-Marc Ayrault on May 18, just days after he had taken office, to hold secret meetings with Germany's opposition Social Democratic Party. Ayrault warned the president to keep the meetings secret to avoid “diplomatic problems”, with the cable explaining he meant “what could happen if German Chancellor Angela Merkel finds out that Hollande is going behind her back to meet with the German opposition”.

The note said that after earlier talks with Merkel in Berlin, Hollande had complained that nothing of substance was achieved and that the Chancellor was fixated on Greece, “on which he claimed she had given up and was unwilling to budge”.

This, the note said, made Hollande “very worried” for Greece and the Greek people, who he said may react by voting for an extremist party.

A note titled “Sarkozy Sees Himself as Only One Who Can Resolve World Financial Crisis” and dated 2008 records how then-president Nicolas Sarkozy “considers it his responsibility to Europe and the world to step up to the plate and resolve the world financial crisis”.

Sarkozy further declared his belief he was “the only one” who could step into the breach, given France's EU presidency at the time, and the lack of US engagement in the crisis.

The note said that Sarkozy blamed US “mistakes” for many of the economic problems, but added he “believes that Washington is now heeding some of his advice”.

A note dated March 24, 2010 reveals that Sarkozy planned to express his frustration to US President Barack Obama over delays in a proposed bilateral intelligence cooperation agreement, with the main sticking point being “the US desire to continue spying on France”.

The note, recounting an exchange between France's ambassador to the US Pierre Vimont and Sarkozy's diplomatic adviser Jean-David Levitte, said Sarkozy planned to raise that along with a number of other sensitive topics at a meeting with Obama on March 31.

A third note, dated June 10, 2011, describes Sarkozy's determination on June 7 to go ahead with a bid to restart direct peace talks between Israel and the Palestinians, “in spite of an apparent lack of interest on the part of some major players”.

The note said Sarkozy was wary about including the Middle East Quartet — the United Nations, the United States, the European Union, and Russia — in the process as they “might not bow to Paris's wishes”.

Sarkozy was considering appealing to his Russian counterpart Dmitry Medvedev for a possible joint initiative without the US, the note said, as well as issuing an ultimatum to Obama regarding Palestinian statehood.

A note dated from 2006 describes a conversation between the then-president and his foreign minister Philippe Douste-Blazy on the appointment of a UN envoy.

The note comments that “Chirac's detailed orders may be in response to the foreign minister's propensity, amply demonstrated in the past and the impetus behind a number of presidential reprimands, for making ill-timed or inaccurate remarks”.