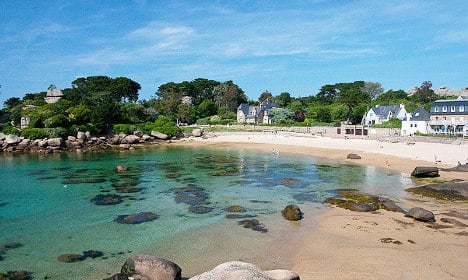 One of the village's stunning beaches. Photo: Etienne Valois/Flickr
The village of Ploumanac'h in Brittany, north western France, has been ranked as the best village in the entire country, at least according to the viewers of “Village préféré des Français” on TV channel France 2.

The isolated coastal village, which is affectionately called Ploum by the locals, beat stiff competition from 21 other villages but came away with the crown in the two-hour programme on Tuesday night.
Second place went to Montrésor in central France's Centre-Val de Loire, and third to Saint-Antonin-Noble-Val, in Midi-Pyrénées to the south. (Photo: AFP)
The website Brittany Tourism has plenty to say about Ploumanac'h, singling out the Pink Granite Coast, which it called “one of the most beautiful stretches of Brittany’s coastline”.
Strange rock formations are a particular highlight of the area too, which the tourism site promises all change with the light. One is even shaped like Napoleon's hat, the locals say. (Photo: AFP)
There's also more than a fair share of flora and fauna, including with the village dubbed by some as “the mecca” for birdwatchers.
But one of the main attractions is the sheer beauty of the area. Just take a look at this short clip from Tuesday night's episode and see for yourself.