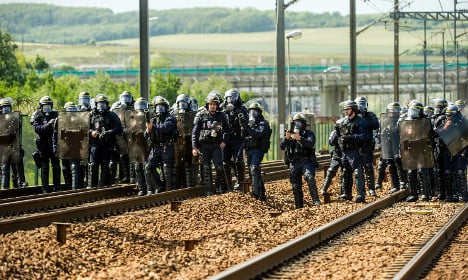 French riot police officers drive out protesting French employees from ferry company "MyFerryLink" in Calais. Photo: AFP
Eurostar's website said the first train of the day from Paris to London left as scheduled at 7.10 am. The first train of the day from London to Paris also departed on time.
On Tuesday, some 200 MyFerryLink workers forced their way onto the tracks, forcing the suspension of the Eurotunnel car and lorry-carrying train services and Eurostar passenger trains.
Some of the thousands of illegal immigrants camped in Calais and desperately trying to cross the Channel to reach Britain took advantage of the chaos to try to climb into the back of lorries backed up on roads approaching the port.