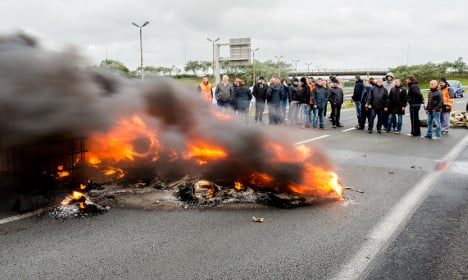 The demonstrations also sparked a scramble among some of the thousands of illegal migrants camped in Calais hoping to reach Britain, as they battled to hitch a ride on vehicles stuck in traffic.

“We have been notified that protesters have gained access to rail tracks which means that for safety reasons Eurotunnel have to temporarily suspend their service,” the firm said in a statement.

A spokeswoman told AFP protesters had “got onto the tracks and were burning tyres.”

The company was advising travellers to postpone their journey unless it is essential.

Confirmation that due to French Port workers present on our tracks, our service is currently suspended. Further info to follow. ^LD

At 4pm, the cross-channel Eurostar service shut down too.
“All trains are suspended for now, this is not something we are in control of and it's entirely dependent on the tunnel,” a spokesperson at Eurostar told The Local.
He added that there were no trains stuck inside the tunnel, but that there were “some” stuck along the line, adding that all customers were being taken care of.
“We're advising passengers, however, to avoid coming to the stations at all until we have further information.”

Some 200 MyFerryLink workers who had forced their way onto the tracks and were later cleared out by French riot police using tear gas canisters.
The protesters already managed to occupy the docks in Calais port, preventing passengers from disembarking and forcing ferries to be diverted to the nearby port of Dunkirk.
At around 7:00pm (1700 GMT), Eurotunnel services resumed but not Eurostar passenger links, local official Fabienne Buccio told AFP.
Port traffic was also due to resume later Tuesday evening. A reporter from AFP said the protest had provoked major traffic jams on the road leading up to the port with Eurotunnel representatives telling The Local that it was proving extremely hard for traffic to get through to the terminal.

There were long tailbacks on the A16 motorway and reports that migrants amassed in the area had taken advantage of the road chaos to try and board the stationary trucks. Police have been forced to move in to try to protect the trucks.

Before Eurotunnel services were halted a spokesman told The Local that trucks and motorists faced chaos trying to get there.

“There are trucks all over the motorway and huge queues so getting through the blockade by port workers is extremely difficult,” he said.

The sailors, from the French ferry company MyFerryLink, were protesting plans by Eurotunnel to sell two of their ferries to rival firm DFDS.

Eurotunnel announced in May it was halting its operational partnership with MyFerryLink due to legal complications, and this month decided to sell its ferries to Danish group DFDS.

“It's out of the question that DFDS takes our boats. Never, never,” exclaimed the head of the main union on strike, Eric Vercoutre, who took up position with around 100 colleagues at the entrance to the tunnel in the early hours of Tuesday morning.

“We've been betrayed,” he said.

Unions say they fear as many as 120 jobs could be at risk from the potential sale.

Local MP Yann Capet said he was “furious” at the company's actions.

Another protester said: “We just don't understand. The boats work very well… We're ready to get going again but I don't know when.” 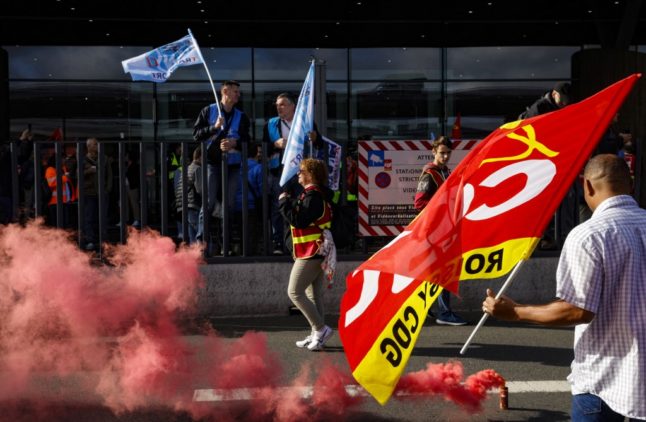