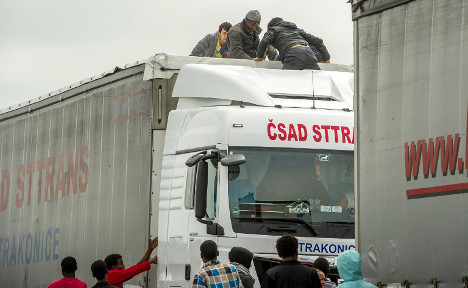 Migrants look to find a way into a truck in Calais. Photo: AFP
Calais, the northern French port town, plays host to thousands of migrants hoping to make it across to the UK.
While many attempt to break into trucks to make the journey, others are paying motorists in cars to help them across in the belief that they are less likely to be caught.
But many of the motorists themselves don't get away with it, and around 100 from the UK have been sent to prison in France in the last year alone after getting caught in the act, French authorities say.
The deputy prosecutor for the Calais region Julie Colaert, told the BBC that the figure of 100 was her best guess, as French law states that it's illegal to keep statistics on prisoners based on their nationality.
“In the last two years we have seen more and more English smugglers,” Colaert told the BBC. (Police try to control the movements of the migrants in Calais. Photo: AFP)
“Trafficking gangs are employing them to take people across in their own cars. The migrants pay a lot of money because it's sold as guaranteed passage to the UK.”
The prosecutor added that Brits now make up a quarter of those brought before the court for people smuggling in Calais, and are the most common nationality after those from Eastern Europe.
Europol, the European Union's law enforcement agency, has said that the people smuggling is being masterminded by organized gangs in the UK, which target those with financial difficulties in an attempt to lure them into cooperating.
Smugglers can make close to €4,000 per trip, though can struggle to get out of the relationship with the gangs once they have worked together.
The phenomenon of local people smugglers has hit France too, with lawyers estimating that around 80 French people in the last year have been arrested on people smuggling charges.
French lawyer Emmanuelle Osmont, based in the port town of Boulogne sur Mer, told The Local recently that the traffickers also preyed on locals in need of money. (Migrants try to enter a truck in Calais. Photo: AFP)
“In the past the traffickers, who are often from Asia or Albania, recruited people around them to do these journeys, but the risks became too great. Then they turned to the truck drivers, but now its local French people who are suffering from financial difficulties,” she said.
She said the traffickers, who are earning “millions each year”, are specifically targeting those French people living in poorer areas and trying to persuade them they are doing a good deed.
“We have even had two or three students up before the courts and they are targeting local business people who may be struggling to pay their bills or their taxes, because of the ongoing economic crisis” she said. “The mafia is benefiting from that.”
Meanwhile in Calais, conditions are squalid for those living in the campsites.  There are an estimated 2,500 migrants living at a camp on wasteland at the edge of the city – dubbed by the migrants as The Jungle II. Most of them come from Eritrea, Sudan and Ethiopia.
One aid organisation recently told The Local that the area was the “worst refugee camp in Europe”.