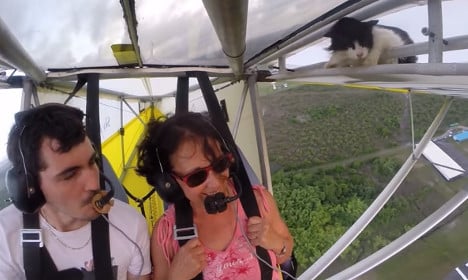 Shortly after the cat makes its surprise appearance. Photo: YouTube
In the video, which was filmed in the overseas region of French Guiana, two passengers are seen taking what appears to be a typical flight in a lightweight aircraft.
Seemingly out of nowhere, a cat pokes its head out from an overhead compartment, much to the surprise of the pilot and his passenger.
The pilot then lands the aircraft, and the cat escapes apparently unharmed.
“A standard flight until… I still don't know if it got in after the pre-flight check or if i missed it,” the uploader wrote on YouTube.
“The cat is doing well, she is still our mascot.”
See the video below, the cat appears after about 35 seconds.