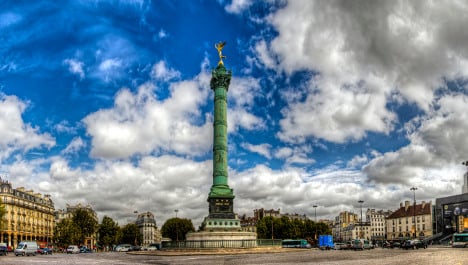 First it was the trucks, then the diesel engines. Then Anne Hidalgo announced a plan to drive cars off the Right Bank of the River Seine.

Now the mayor's bid to reduce pollution in the French capital has seen her turn her attention to some of the city’s most famous squares which she wants to hand over to pedestrians.

At the Place de la Bastille at the weekend Hidalgo revealed that she had seven squares in her sights including Bastille itself, Place de la Nation, Place du Panthéon, Place d'Italie, Place de la Madeleine, Gambetta and Place de Fêtes, in the north east of the city. (Place de la Madeleine at rush hour. What will it look like in the future? Photo: Trish McGinity/Flickr) “These are seven squares in Paris that we are going to look at, along with residents, on order to transform them,” she said.

And in a play of on the French word for square, place, which also means space, Hidalgo said: “We talk about squares, but where is the space? I don’t see it.”

“This is about rediscovering the history of Paris and its squares. How? Of course there will be less cars in order to create space for pedestrians and children,” she said.

Hidalgo said Bastille will end up like the Place de la Republique, which was recently transformed to the benefit of pedestrians at a cost of €24 million. Previously the square was a huge roundabout, but now cars are restricted to only three sides of the square.

The budget to change the lay-out of the other squares will only be €30 million in total. Hidalgo has set a date of 2020 for when they will be completed.

A public consultation on the future of the squares will now take place before a competition will take place asking the public to come up with new designs.

SEE ALSO: So what's the most beautiful square in all of France?