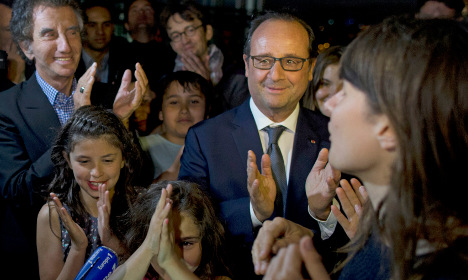 Hollande looks like he's on the cmpaign trail when he made a surprise appearance at the Fête de la Musique on Sunday. Photo: AFP

An appearance by Hollande's supposed lover, actress Julie Gayet, at an official function last week set tongues wagging that she was being gradually introduced as France's new first lady ahead of the 2017 presidential election.

Gayet's appearance at a wartime memorial ceremony was pure coincidence, Hollande's team said, but society gossip-monger Paris Match claims she is being introduced “little by little” into the presidential limelight.

Hollande has refused to be drawn on the nature of their relationship, which was dramatically revealed last year by a tabloid magazine. The report destroyed his relationship with journalist Valerie Trierweiler, who later published a damaging kiss-and-tell book about her time in the Elysee Palace.

Nor will Hollande officially admit to being in campaign mode, saying: “I am not in a race which would not yet make any sense.

His schedule suggests otherwise, with the 60-year-old spending a busy few weeks criss-crossing the country and pressing the flesh.

“A handshake, a selfie, a kiss — that's three votes,” said an advisor at one recent appearance.

Hollande also looks to be buttering up voters with policy promises.

Having campaigned strongly on an anti-banking, anti-austerity message in 2012, he confused many supporters by instantly reversing course once in office, raising taxes on the middle classes and reining in public deficits.

He is now trying to spin those efforts as the first step towards reducing taxes in the future.

“The French have perfectly well understood that today's deficits can be tomorrow's taxes,” he told a local paper last week.

Hollande is hoping that meagre signs of growth in the economy — predicted at 1.0 to 1.2 percent this year — will afford him a few new sops to pensioners and state employees, as well as a drop in taxes for “nine million households”.

“We get the impression the president is playing Father Christmas,” scoffed Laurent Wauquiez, from the right-wing opposition. So far, the path looks daunting for the man with the worst popularity ratings in modern French history.

Hollande has been clawing his way back up the polls in recent weeks, but the latest showed only 22 percent of voters were satisfied with his performance and only 2 percent very satisfied.

Hollande has tried to offset some of the criticism by saying he would only stand for a second term if he reduced unemployment, but many doubt his sincerity on that front.

“Either way, he'll go for the presidency,” said Stephane Rozes, head of think tank Cap. “No one on the left has emerged as an alternative to Francois Hollande.”

Many have wondered if the slightly more popular prime minister, Manuel Valls, a tough-talking Blairite who has taken on the Socialist Party's left wing, may run instead. But the left faces enough problems and division without a fratricidal leadership contest, and Hollande is pulling out all the stops to cast himself in a presidential light, with appearances at a slew of national and international events.

“Like a crescendo, he's building up evidence for his candidature with all these symbolic presidential appearances,” said Rozes.

His next soapbox will be at the centre of the global climate conference being hosted by Paris at the end of the year — a chance for Hollande to present himself as literally the saviour of the world.

He'll also have the European football championships, hosted by France in 2016, to build up some goodwill.

His primary opponent on the right is Nicolas Sarkozy, who returned to frontline politics last year for the first time since losing to Hollande in 2012.

Sarkozy regularly derides the president's “mediocrity”, but looks equally embattled himself after a barrage of corruption scandals and a multitude of challengers within his own camp.

Many right-wing supporters would like to see the more cerebral, less antagonistic Alain Juppe, a former prime minister, bid for the presidency — he was 10 points ahead in a recent poll of centre-right voters.

Then there's the insurgent threat from far-right leader Marine Le Pen, whose National Front has won around a quarter of the vote in local and European elections.

By snatching anti-immigration and anti-EU votes from across the political spectrum, she stands a good chance of knocking out one of the mainstream candidates before they make it to the second-round run-off — a fear that is likely to weigh heavy on all candidates as the presidential polls grow closer.

What are the rules? Does France have a hijab ban?

No, France does not have a ban on hijabs in public spaces. However, the rules differ when it comes to headscarves and full-face coverings and this can be confusing because both the full-face veil and the Muslim headscarf are often referred to a voile in French.

In 2010, the country brought in a complete ban on clothing that includes full-face coverings – including the burka and niqab. These cannot be worn in any public space in France, at risk of a €150 fine.

The hijab or headscarf, however, is completely legal in public spaces including shops, cafés and the streets and it’s common to see women wearing them, especially in certain areas of the big cities like Paris.

However, that doesn’t mean there is no restriction on women’s freedom to wear the Muslim headscarf.

In line with France’s laws on laïcité (secularism) it is forbidden to wear overt symbols of religion – including the Muslim headscarf – in government buildings, including schools and universities (with the exception of visitors).

Public officials such as teachers, firefighters or police officers are also barred from wearing any overt symbol of their religion while they are at work.

Burkinis are also subject to certain rules. They are not allowed in public swimming pools in France where there are strict regulations regarding dress (Speedos only for men and compulsory swimming caps), but they are allowed on beaches and in other public spaces.

READ MORE: Burkini: Why is the French interior minister getting involved in women’s swimwear?

This became a source of controversy during the summer of 2022, when Grenoble challenged the ban on the full-body swimsuit by relaxing its rules on the swimwear permitted in public pools.

In response to the challenge, France’s highest administrative court voted to uphold the countrywide ban in June.

What about in athletics?

Some federations, such as the French Football Federation, have banned players from wearing the hijab, along with other “ostentatious” religious symbols such as the Jewish kippa.

Other sports, such as handball and rugby, have a more open position.

Are there plans to change these rules?

Currently, there are no government plans to reverse the ban on full-face coverings including the burka and niqab or to allow the symbols of religion in public buildings, like schools.

There have been attempts to change the current legal framework on the headscarf, however.

In 2021, Senators proposed an to the government’s “anti-separatism bill” that would ban girls under 18 wearing a hijab in public. Several other amendments also targeted Muslim women – such as banning mums from wearing the hijab when accompanying school trips – however these were all defeated in the Assemblée nationale and therefore did not become law.

Are the rules followed?

The rules around the niqab are generally followed and it has become quite rare in France.

However sociologist Agnès De Féo, believes that in the years following its ban, the full-face covering became more popular, rather than less.

She wrote that “the law had an incentive effect: it incited women to transgress the ban by embracing the prohibited object. Prohibition made the niqab more desirable and created a craze among some young women to defy the law.”

The rules around the wearing the headscarf in public buildings are generally respected, but it’s not uncommon for rules around any form of Muslim dress to be over-zealously interpreted – sometimes by accident, sometimes with a cynical political intent.

One key example was in 2019, when Julien Odoul, a member of Marine Le Pen’s National Rally (RN) party, caused widespread outrage after posting a video of himself confronting a headscarf-wearing woman who accompanied students on a field trip.

He cited “secular principles” – arguing that the headscarf’s ban in schools should also extend into school trips.

In response, the country’s Education Minister at the time, Jean-Michel Blanquer, clarified that that “the law does not prohibit women wearing headscarves to accompany children.”

There was also controversy at election time over candidates who appeared on posters wearing the hijab, although again this is perfectly legal and doe snot contravene secular principles.